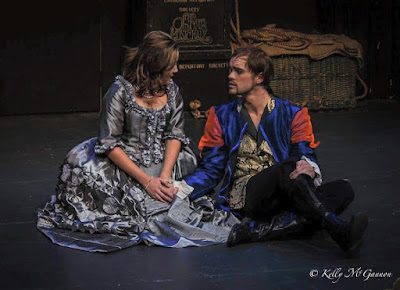 
For a famous womaniser, Casanova doesn’t have much game.  There are no daring exploits, no midnight meetings, and not even one hasty elopement.  When a woman yields, it's because of bulldog persistence.  An elderly Casanova (Tony Turner), trapped by his own legend, tells the truth of his life to fascinated kitchen maid Edith (Steph Roberts).  Or 90% of the truth.  For one thing, he’s taller and better looking in his memories (with Ben Russell as young Casanova).  Even when making a last confession, he can’t quite let the facts get in the way of a good story.
Director Jarrad West takes pains to depict the whole Casanova.  Not just the lech, but the Renaissance man and successful social climber.  Casanova only has to pick up a violin and suddenly he can play it like a virtuoso - or at least, this is how the old Casanova tells it.  We constantly question Casanova’s reliability.  At one point, Casanova pursues a boy castrato (Bojana Kos) and is amazed, after conquering their resistance, that they have in fact been a woman in disguise the entire time.  Anyway, that’s his story and he’s sticking to it.
Casanova is a child of the theatre, always playing parts (lawyer, doctor), usually without appropriate qualifications.  The theatricality of Casanova’s self-presentation is represented in the set, which is plastered with posters from old Canberra Repertory shows.  The cast has a great deal of fun with sly in-jokes, whether direct references to the previous Repertory production The Crucible (Casanova shares some cast with that production) or the uncredited cameo appearance of two Repertory veterans who are triumphantly informed that they do not have speaking lines in this play.
But while Turner’s old Casanova has moments of slyness (very nearly seducing the maid Edith, old age and probability be damned), Russell’s young Casanova is surprisingly innocent and awkward around women, most confident and sure of himself with a woman who might be a man.   While Casanova talks himself up incessantly, the women are generally the aggressors, whether it’s the servant who gives him a hand job or a pair of ageing sisters who decide to initiate him into full manhood.  Early on he meets Henriette (Amy Dunham), a woman of equally few scruples who teaches him some important lessons about life when she steals both his heart and his wallet.  Henriette becomes the woman he always wanted but couldn’t have and the pair proceed to invent baroque reasons for not being able to be together.  Everything Casanova does is about winning Henriette, and his attempts are always doomed.  He makes his fortune but then - calamity - she has had a child with his rival, the odious Grimani (Chris Zuber).  For this Casanova, marriage and children are an insuperable barrier to romantic adventure.


Casanova does meet his match with Bojana Kos’ Belino, the gender bending castrato who conquers Casanova in the game of love.  Kos’ characterisation is so sensual and charismatic that I began to actively question Casanova’s taste in women.  It made sense for Casanova to be blinded to Henriette’s true worth because of an infatuation with Belino, but instead Casanova’s feelings for Henriette are what shipwreck his attempted marriage.  We are expected to believe that Henriette loves Casanova back, but cannot risk her newly acquired social position for love.  But this is the story as Casanova tells it, and perhaps he could not accept the truth behind Henriette’s repeated rejections of his insistent overtures.
Despite some sentimentality, this is an engaging romp with a carnival atmosphere - and just a dash of cocaine-fuelled mania.  The ensemble launch into full-scale clowning, with Samuel Hannah-Morrow and Riley Bell in particular getting big laughs for their comic performances.  Tony Turner gives an extremely strong performance as the prickly elderly Casanova and Steph Roberts is a perfect foil for him, generously giving Turner the spotlight but drawing us into his story with her flustered yet thrilled reactions.  Director West is also particularly interested in exploring Casanova’s potential homosexuality, with many hints that he did not confine his studies strictly to women.  As the old man’s memories start to fray, we become less sure of the truth of events.  In the end we are left with only one certainty: not that Casanova loved women, but that he always loved one woman.