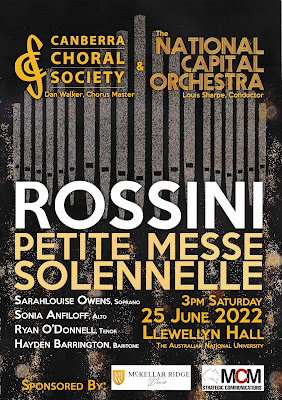 As the stage of Llewellyn Hall filled with dozens of musicians and singers, it became apparent to the expectant audience that this performance of Gioachino Rossini’s ‘Petite Messe Solennelle’ (Little Solemn Mass) was not going to be ‘little’. 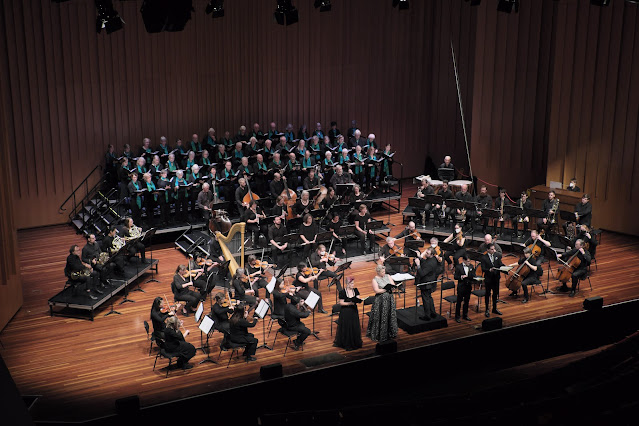 Originally scored in 1863 for two pianos, harmonium and voices, the Canberra Choral Society and the National Capital Orchestra performed the fully orchestrated 1867 version of the work with orchestra, chorus and four solo singers.

Commencing with the ‘Kyrie’, the chorus gave a nicely controlled performance of this sombre first part of the work.  The dramatic start of the ‘Gloria’ which followed showed the full power of the chorus.  The sound was rich and colourful and the addition of the four soloists added a charming dimension.

‘Gratias agimus’ (We Give Thanks to Thee) was beautifully sung by Sonia Anfiloff (alto), Ryan O’Donnell (tenor) and Hayden Barrington (bass).  O’Donnell’s tenor aria ‘Domine Deus’ (O Lord God) that followed was also given a performance full of feeling.

There were numerous other memorable moments throughout the performance.  Hayden Barrington’s rich baritone gave ‘Quoniam tu solus sanctus’ (For Thou Only Art Holy) a pleasing authority and soprano, Sarahlouise Owens, sang ‘Crusifixus’ (He was crucified) with great control and depth of feeling.

The Offertorium section was played very well by organist, James Porteous, and ‘Sanctus’ (Holy, Holy, Holy) was the major highlight of the later part of the work with soloists, chorus and orchestra blending perfectly to produce a powerful and thrilling sound.

Louis Sharpe, did an excellent job conducting this huge number of singers and musicians.  The accuracy and beauty of the singing by the chorus was a credit to Chorus Master, Dan Walker.


This major undertaking proved to be a highly memorable concert by all involved.  They fully deserved the enthusiastic and prolonged applause by the audience at the conclusion.