Mozart's 'The Marriage of Figaro'.
Co-Opera Inc, at The Street Theatre, March 29 and 30. 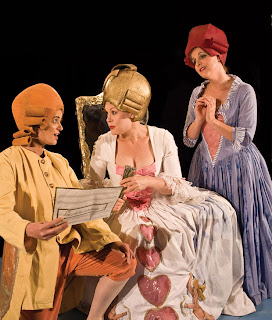 I describe this performance as a gem because it's small, but brilliant and glittering. Forget huge and lavish performances of 'grand opera' in world famous opera houses; Co-Opera is a touring company which has proved able to bring the best in opera to smaller stages and to country venues.

I found it totally delightful, from my first glimpse of the lighted set, a series of linked platforms with built-in lighting, to the performances of the singers, whose voice, costumes, movement, and acting came together to make a visual and aural experience to remember.

Since I am not a music critic but simply a lover of good theatre, I will leave detailed reviews to others. Suffice it to say that praise is due to the Director, the Musical Director, the Designer (not credited in the program) and the Lighting Director.

Malcolm Miller
Posted by Canberra Critics Circle at 10:35 AM