Let the Sunshine by David Williamson 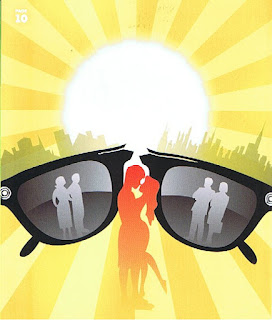 This is a comedy of very good manners, on the part of the cast and crew especially.

Even the characters finally work their way through their prejudices, self-centredness and argumentativeness to a neat rom-com happy ending, as the parents finally learn to accept the reality of their 30 and 33 year old children’s love of the “inward smile” kind.

What I liked about this production, reviving the success of the original 2009 Ensemble Theatre show, was the high energy level of all the performances, the nicely managed twists and turns and timing which showed excellent directing, the design of a simple set which kept the action constantly on its toes, and the live and recorded sound design.  Williamson’s best comedies of manners are traditionally ‘well-made plays’ and this production is well made on all fronts.

Reviving the play, and touring around the country, is also a well-worthwhile exercise.

It reflects on the Great Financial Crisis which began in 2007, and looked forward to the likelihood of things getting worse rather than better.  In 2012 we can reach our own conclusions about Williamson’s perspicacity.

It also shows us the ‘issues’ of Gen X, Y or Z (wherever we are up to by now), especially letting us come to terms with the fact that while all things change, all things stay the same, as each new generation has to deal with its parents.  Both sides may look for rational and reasonable deals, but the human condition is not actually of that kind.  The best we can do is look for the kindness of the inward smile.

In other words, I was more than entertained by the comedy.  It was a satisfying night out at a serious level too, and makes me keen to see the next Williamson play in a couple of weeks’ time, When Dad Married Fury, which Sandra Bates is directing at The Ensemble.  The idea that Williamson’s move to Noosa was into retirement has been knocked on the head, especially as, in Let the Sunshine, he seems to reflect through film-maker Toby and his musician-turning-producer son Rick on something of his own experiences since the 1960s.

I have one gripe, though, about the Christine Harris & HIT management, as I did about the management of the previous The Q presentation I reviewed, Syncopation by Critical Stages & The Follies Company.  Can’t touring companies at least provide the audience with a record for them to take home of the cast and crew?  I think it’s an insult to the actors especially, and unfair in terms of their careers, as well as unfair to The Q, that I had to stand in front of a single poster, while others had to read over my shoulder, in order to write down the names of seriously praiseworthy theatre practitioners.

Here the actors are:  Toni Scanlan as the musician’s mother Ros, Dennis Coard as his father Toby, Peter Phelps as millionaire developer Ron, Alexandra Fowler as his big-spending wife Natasha.  Their daughter, feral lawyer and partner in love, Emma was played ferociously at first and warmly at last by Hannah Norris, and Ryan Hayward transformed from wafty musician to business-like husband Rick.

With director Denis Moore were Shaun Gurton (set design), Adrienne Chisholm (costumes – Ron’s changes got great laughs), Nick Merrylees (lighting – spot on) and Peter Farnan (sound).  But without a program, I haven’t all the pictures I would like to show here.  This is a shame.

Posted by Canberra Critics Circle at 11:25 AM