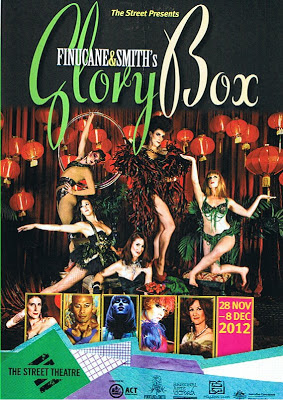 Glory Box is the latest version of The Burlesque Hour which I reviewed in February 2009 in the Canberra Times.  Some items, like strawberries and blood-red soup, are still part of the show, but this show generally did not have the same bite as before.  Only the last major scene – “Miss Finucane’s collaboration with the National Gallery of Victoria (Get Wet for Art!)” – reached something like the satire of the Hour.

Even so it was Yumi Umiumare, with her expertise in Butoh, who had been the standout in 2009.  She was missing in this action, and there was no-one to match her this time.

Of course, age may be wearying me, but Glory Box was more like a ritualised karaoke, broken by minimum (but well done) items on the trapeze and hula hoops.  And, though I had warned people back in 2009, I still forgot to take my earplugs.  The sound volume and oomph, oomph was perhaps even more penetrating this time around.

There was more nudity, too, but more nudity is less titillating, unless that’s just my age showing again.  Lots of other men in the audience cheered the swinging bits, though the women had no comparable male bits to cheer, since Paul Cordeiro was nude only for a brief discreet backside-to-the-audience exit.

The show is still funny and enjoyable, but in my view just not as engaging or thought-provoking as the original Burlesque Hour.  There were still plenty in the audience standing, stomping, clapping and dancing in what would have been a mosh pit in a larger venue – and buying Burlesque Underpants from the Glory Box on their way out.
Posted by Canberra Critics Circle at 11:57 PM