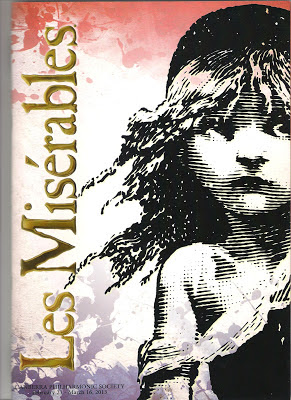 
“Les Miserables” is an epic musical of operatic proportions and with their stunning new staging at the Erindale Theatre, The Canberra Philharmonic Society does justice to Boubil and Schonberg’s masterful adaptation of Victor Hugo’s stirring saga, with a thrillingly sung production that crackles with energy, and occasionally bursts off the stage to engulf the audience..


Director Jim McMullen, has gathered a huge  cast and orchestra  and  harnessed significant resources for this production which with the help of an  impressively flexible setting,  brilliantly captures the sweep and excitement of the story with  imaginatively staged  and choreographed set pieces balancing touching moments of genuine pathos.


At the heart of the show is the superbly modulated, beautifully sung performance of Dave Smith, as Jean Valjean who manages to capture the passion, strength and dignity of a man struggling with his ideals.  Cast against type, as the hateful Javert, Adrian Flor matches him with an equally powerful performance, revealing an unexpectedly fine baritone voice in a show-stopping version of “Stars”.


Vanessa de Jager is heart breaking as the feisty Eponine. Mat Chardon O’Dea and Laura Dawson are beautifully matched and haunting as the young lovers, Marius and Cosette. Ian Crocker and Kate Tricks are wonderfully awful as the Thenadiers, while Kelly Roberts as the tragic Fantine, and Grant Pegg, the heroic Enjolras, both provide stand-out performances in an ensemble production rich in excellent cameos.  Not to be missed.
An edited version of this review appears in CITY NEWS Feb.28th March 6. edition.

Posted by Canberra Critics Circle at 11:47 AM