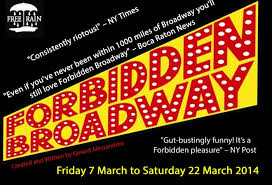 
For those who love Broadway musicals this show is sheer bliss. But even if you couldn’t care less about Broadway, there is still much to enjoy in the clever performances, the witty costumes and the spot-on choreography of this wicked, affectionate send-up of the Broadway musical genre.


“Phantom of the Opera”, “Les Miserables”, “Wicked”, “Cats” and “A Chorus Line” are among the Broadway shows skewered with hilarious accuracy in this brilliant, fast-paced, constantly entertaining show.


The clever decision of director Anne Somes to expand the cast to twelve highly talented performers allows each to shine. There are many highlights, too many to list here, but personal favourites included Georgia Pike, as a wonderfully garrulous Ethel Merman, treating David Spence’s Phantom of the Opera to a singing lesson. Pike again, as Rita Moreno, triumphantly out-diva-ing the plucky Chita Rivera of Halimah Kyrgios, in their marvellous duet “America”, or Kyrgios striding the stage as a sequined Liza Minnelli in cabaret mode, belting out “Liza One Note”.


“Forbidden Broadway” is packed with such marvellous moments; all presented in an appropriately colourful setting featuring revolving doors which allow the cast to move quickly and seamlessly between numbers.


Seated centre-stage at a white baby-grand piano, Nick Griffin’s accompaniments brilliantly capture the requisite Broadway feel; however over-amplification of the voices meant that some of the all-important lyrics were unintelligible on opening night, providing the only blemish on an otherwise brilliantly executed production. Highly recommended.


This review appears in the 13th March print edition of CITY NEWS and also the digital edition.
Posted by Canberra Critics Circle at 12:16 PM