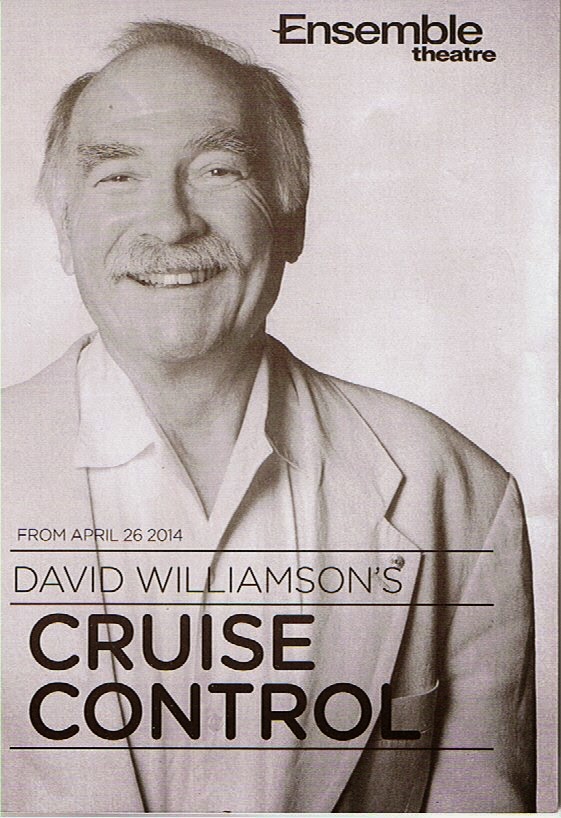 Had a terrific night.  Warm welcome home for David W.  And what a cruise!  Not sure so much about the control bit yet, but after all that was just David having a bit of fun.  Of course he’s terribly up-to-date, so instead of putting on the old-style slide night of boring stills, he had a stack of Twitter-length YouTube movie clips – just sooo funny, you wouldn’t believe!

Cousin John B. was there – sat just near me in fact – so David made sure he got the Shakespearean shot in, of Richard (he’s the English dark-side-of-everything novelist, you know) putting down colonial Aussie Imogen when she thought his “vaulting ambition” was from Hamlet.  Vaulting was right, in the end, as it turned out – just like Macbeth.

I suppose a lot of us were in the business, being Opening Night and all, so it really did feel like family to see David’s son Felix pretending to be that awful Richard who was pretending to be the ants-pants of sexual predators.  He did it so awfully well, in a very English way, that in some clips we almost believed he was being honest.  No wonder we felt for poor old ex-Ascham private school girl Imogen when she was so nearly trapped.  Fancy – despite going to the most expensive school in the world (or at least Sydney), if she had known her Shakespeare she might have been done for.

Of course we knew her type – marrying a bra boy like Darren making his fortune selling surfboards to China.  He was a laugh when he wasn’t basically an embarrassment.  But then he could actually splash the Dom Perignon around, and actually knew how to protect his wife.

The other women were definitely in our circle – Richard’s wife, editor Fiona, and Silky, the casting agent.  But we knew for real, if we hadn’t worked it out at first, that David was just putting the whole show on, when Silky’s husband Sol turned out to actually be Henri Szeps in his seemingly inevitable role as a dentist (though acting a typical self-effacing New York Jew, he said he just fixed gums).

It got to be a bit of a selfie in the final clip, for there was David himself, playwright and his own director, smiling modestly back at us, hoping that we thought he had achieved what editor Fiona had advised Sol about his novel idea of Al Qaeda sleeper dentists causing mayhem.  Though it was a plot that grabbed attention, she pointed out that it also needed to be credible if he hoped to sell his story.

Well, I think David’s plot is not absolutely credible, but I can’t reveal why not, since that would tell you the ending which, as in any mystery story, must remain sacrosanct until you see it for yourself.

But I can certainly say that, perhaps surprisingly for such a literate Ensemble audience, we could identify with the motivations for all the cruisers’ actions, even those of the Maroubra surfer.  And I can also say that we could retreat to the bar feeling quite OK about people being left believing something that was not true if it meant that they were now in control and communal justice had been done.

In other words, David has shown that he hasn’t lost the Williamson touch.  Cruise Control is a ‘well-made play’ in the traditional sense.  He is in control of his theatrical form, comedy on the edge of farce in one direction, while reflecting enough of reality to bring to light questions for our consideration.

In particular the playing out of the fraught relationships between the three couples, the literary English, the sentimental American Jewish and the down-to-earth Australian, could easily have been let go into slapstick stereotyping.  This can get laughs, as we laughed early in the play, except that as characters come and go through the multiple entrances and exits we expect of a farce, each new interaction exposes enough complexity in each character for us to identify with them and to make more than superficial judgements about them.

Tieing the drama together is the motivation common to each couple.  The cruise will be the make or break point for the woman in each marriage.  Tieing the situation together is the character of the Filipino waiter, whose real name is Jesus.  On board the cruise ship he is known as Charlie.  Can his family stay together as he works eight months straight, has two months at home with children and wife, provides them with more money than anyone else in the village, sends his children for a good education, then goes away again for the next eight months?

At this point I can say that I think Williamson has achieved the dictum of his own character, the editor Fiona.  There is a level of credibility here, which makes for interesting but tough-minded acting work for the cast, to set the correct level.

Kenneth Moraleda as Charlie, who has a beautiful singing voice, provided a softness in his linking role which I’m not sure I’ve seen in any of Williamson’s earlier plays.  I generally have doubts about a writer directing his own work, but I sense that Moraleda’s gentle singing which opens the action became a point for Williamson as director to return to for each character, and each actor – Helen Dallimore as Imogen Brodie, Peter Phelps as Darren Brodie, Kate Fitzpatrick as Silky Wasserman, Henri Szeps as Sol Wasserman, and Michelle Doake as Fiona Manton – knew they could trust Williamson the writer to give them the opportunity for those softer moments which brought their characters to life; and each made the most of their opportunities.

The one character without such a moment is Richard Manton.  The solution for Felix Williamson was to establish moments – even in a kind of distant-gazing pose – which gave Richard a different kind of life.  His ‘softening’ became a threat, a manipulative lie rather than a truth with which we could empathise.  It says a great deal about professionalism in today’s Australian theatre that a father can so successfully direct his own son.

And there’s no doubt that the Ensemble Theatre has a family atmosphere for a new Williamson work which enhances this play about couples moving beyond their youthful expectations to the point, as Fiona says, where she has at last ‘grown up’.