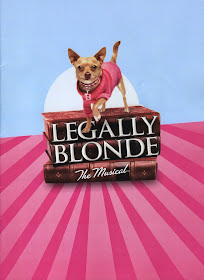 Free Rain Theatre’s Canberra premiere production of ‘Legally Blonde: The Musical’ is an exuberant show which has been generally very well produced.  The slight story about an apparently brainless blonde who, rejected by her boyfriend, follows him to Harvard law school and against all odds becomes a successful lawyer, works very well as a musical.

Opening on Broadway in 2007, the show ran for 18 months.  It ran nearly double that length in London from 2009 and the Australian production ran nearly a year in both Sydney and Melbourne from 2012.  In Australia it won 5 Helpmann awards including Best Musical.

The music and lyrics of Laurence O’Keefe and Nell Benjamin don’t have any stand out songs but the score overall is very enjoyable, while presenting quite a challenge for the singers.

Mikayla Williams, as Elle, the blonde of the show’s title, gives an outstanding performance in a huge role, making Elle a believable and endearing character and singing and dancing superbly.  Dave Evans gives a delightfully low-key characterisation as Emmett and he’s in top form vocally as well.  Jenna Roberts commands the stage whenever she’s on as Paulette and her song, ‘Ireland’, is a real show-stopper.  The minor characters in the show are all very well played by cast members too numerous to mention here.

The choreography by Michelle Heine deserves a special mention.  It’s exciting, energetic and the well-drilled cast make it all seem effortless and enjoyable.  Costumes designed by Fiona Leach are eye-catching and appropriate and Phil Goodwin’s lighting design is creative and attractive.

Director, Derek Walker, has done a superb job here with the show flowing well from scene to scene.  The depth of characterisations he has achieved with everyone in the cast is especially notable.

With all the top notch work happening on that stage, it’s a pity that the ugly set looked like what you get when designers are given an inadequate budget to build it.  Sound balance on the show was also badly executed.  The orchestra was much too loud for the singers, especially in the up tempo group songs.  Nicholas Griffin has done an excellent job with the musical direction on this show but his efforts are wasted when you can’t hear the lyrics.

Nevertheless, ‘Legally Blonde: The Musical’ is a superior local show that will please just about anyone.  Don’t miss it!