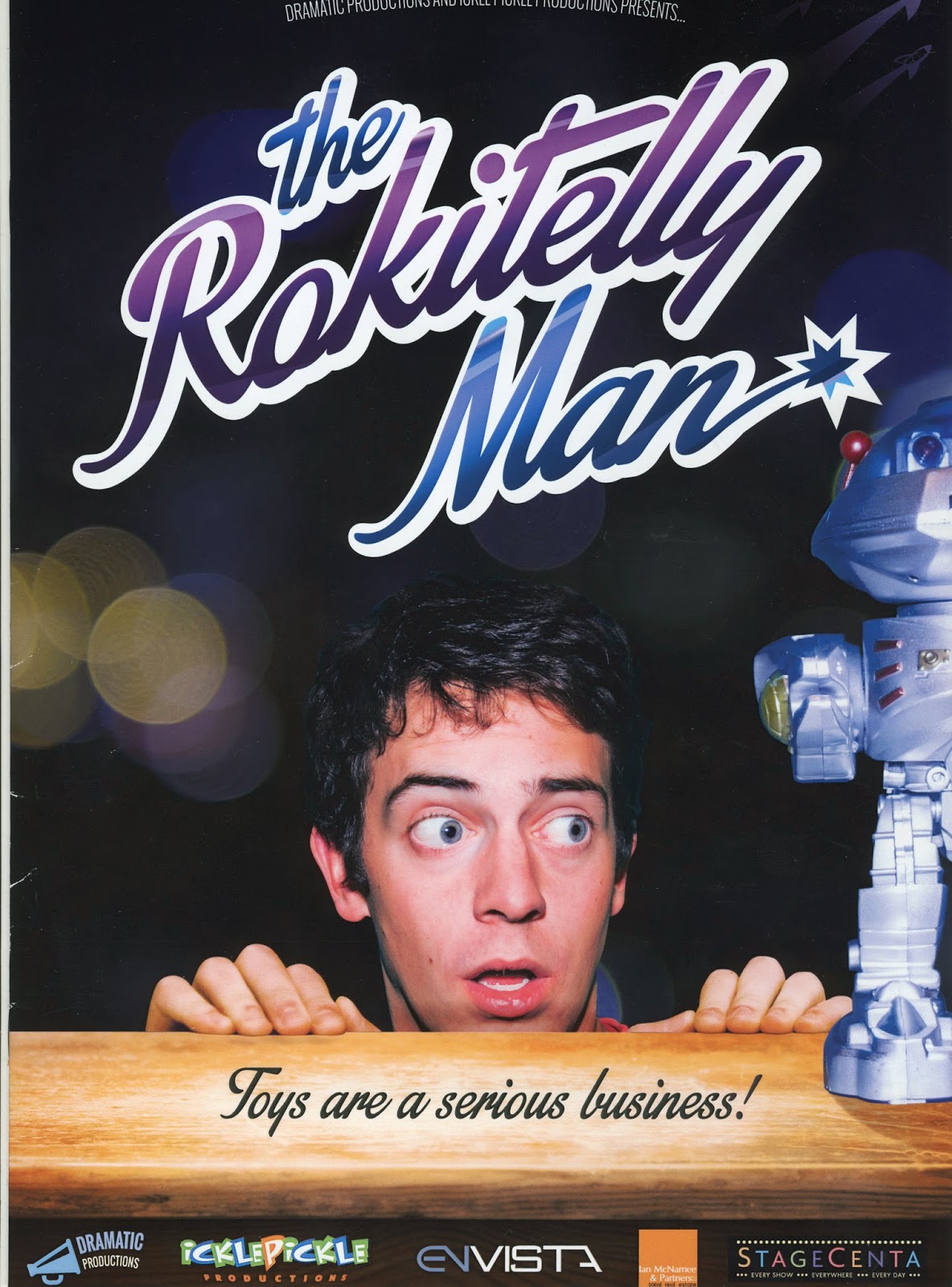 Writing a musical, they say, is one of the hardest things to do.  Most musicals go through various incarnations until they arrive at their final form and even then success isn’t assured.  I’m sure that ‘The Rokitelly Man’, a new Australian musical, will continue to evolve beyond this inaugural season at the Belconnen Theatre.  It should, because it’s basically a worthwhile and entertaining show.

Michael Hemming’s book concerns a naïve young guy, Jeremy, working as a packer in a toy factory who has a brilliant design for a new toy.  The head of the design department steals it off him and he learns to stand up for himself and find his true love along the way.

Director, Richard Block, has done a fine job bringing all the elements of the show together.  The set design, credited to a team including the director, is attractive and creates the right atmosphere for the cartoon-like action that follows.  Multiple scene changes are, for the most part, handled smoothly.  The large version of the toy designed by the show’s hero, Jeremy, has been superbly done.

Miles Thompson as the young designer, Jeremy, gives an appealing performance and has a pleasant singing voice.  Alex McPherson as Cindy, the girl of his dreams, is charming and delivers her songs with a touching level of emotion.  Debra Byrne, Max Gambale and Joe McGrail-Bateup as the toy factory bad guys give appropriately hammy performances and perform their songs with ease and great humour.  Miriam Miley-Read as the man-hungry secretary, Angela, gives a standout performance that is both hilariously funny and sad at the same time.  She knows how to get the most out of a song, too.  The rest of the cast give enthusiastic and nicely-judged performances.

Musical director, Max Gambale, trained his cast vocally very well, but it’s a pity the music had to be pre-recorded.  I understand there are probably budget considerations here, but it makes for a sound lacking in energy.  A couple of cast members seemed to have difficulties vocally with some of the emotional songs late in the show, too.

Choreography by Kathyrn Jones was delightful and suited the skills of the performers and style of the show.  Some of the jokey touches that were fun at the start, though, became a bit wearing through repetition as the show progressed.  Costumes by Anne Mewburn-Gray were nicely imaginative.  The fancy dress party costumes were particularly well-done and very funny.  Hamish McConchie’s lighting design gave a good atmosphere to the whole show.  The show isn’t using amplification and at times words get lost from the performers.  However, the sound balance between the recorded orchestra and singers is fine.

Andrew Hackwill’s music score is a winner with appropriate variations in style to suit individual characters and moments in the play.  The lyrics are clever and add to the fun of the show.  It needs a stronger song for the finale, though.

The book of the show needs some trimming.  It takes too long to get to the main plot of Jeremy’s toy design.  Subplots involving Jeremy’s friends, while fun, slow the show down and there’s too much time spent on the bad guys of the toy factory, too.  The more serious second act needs more light and shade after the fun of the first act.

At the start, the audience was requested to take photos with their phones during the show and put them up on social media.  As a result, my attention was distracted from the stage whenever a phone screen lit up.  The joy of live theatre is to be drawn in to the action happening before you.  Why would a serious director agree to anything that disturbs the concentration of his audience during his show and why would a production team risk having a pile of poorly taken amateur photographs turning up on Facebook?  This is a good little show and doesn’t deserve to be harmed by gimmicks like this.