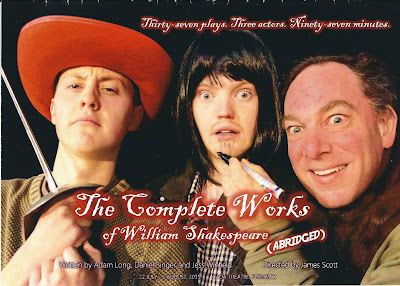 Thirty seven plays, three actors, 97 minutes. That’s the promise made with ‘The Complete Works Of William Shakespeare (Abridged)’.  You even get the sonnets thrown in, too.

This delightfully loony show started off at the Edinburgh Festival Fringe in 1987 and ran in London for 9 years.  It’s not surprising as it’s a great audience pleaser but it has to be done well to succeed.

Luckily, the three actors in the Honest Puck production are in full command of the show, never letting the frenzied action falter for a moment.  James Scott, the director and cast member, displays excellent comic timing while also showing he has the skills and voice to play any of the classic roles he’s sending up.  His funniest moment had him trying to do ‘To Be Or Not To Be’ from ‘Hamlet’ and dealing with giggling audience members at the same time.

The show is a brilliant showcase for the two young actors in the cast – Brendan Kelly and Ryan Pemberton.  Brendan Kelly is hysterically funny trying to patch up moments where things apparently are going wrong like mixing up a biography of Shakespeare with that of Hitler or finishing Othello with the final lines of Romeo and Juliet and still managing to make them rhyme.  He demonstrated a strong talent for the mechanics of farce and his mock innocence was very appealing.

Ryan Pemberton plays the straight man much of the time in the show but has his moments of high comedy, too.  Left alone on the stage when the other actors have refused to continue, his nervous attempts to fill in and entertain were delightful.  His interaction with audience members was skilfully done and his sense of timing in physical and verbal comedy was very impressive.
Director, James Scott, has produced a highly entertaining show which moves at a wild pace without letting up for a moment.  He keeps it visually interesting with the use of crazy props and improvisations and the physical comedy is very well staged.  The Tudor-looking set by Geoff Patterson and Luke Patterson works very well and the wacky costumes have been well-executed by Imogene Irvine and Kathleen Masters.

There’s a lot of amusing audience interaction in this show but nothing threatening.  Well, OK, you might get vomited on but no-one on opening night seemed to mind.  You don’t need to know anything about Shakespeare’s plays to enjoy this.  In fact, it might be an advantage!

Posted by Canberra Critics Circle at 10:38 AM