Labels is not so much a piece of theatre as a superbly argued plea for tolerance in a cruel and unjust world. That is not to say that Sellman-Leava’s solo presentation of facts, statistics, personal experience and words from the very mouths of people such as Enoch Powell, Idi Amin, David Cameron and Tony Abbott among other influential political figures is not theatrical. 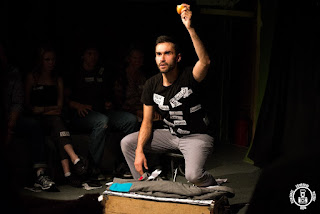 On stage with only a suitcase for a prop which opens to reveal a fold-up seat, a tape deck, paper to make paper planes and paper boats, Sellman-Leava launches into an unapologetic attack on prejudice, racism, intolerance and humanity’s obsessive propensity to label people according to their race, creed, gender and faith. The labels, written on a series of cards or hastily prepared paper come thick and fast. From the very opening we are presented with the bigoted, fear-mongering cries of the likes of Powell, Amin and the Conservative League, performed with a keen talent for impersonation by Sellman-Leava. 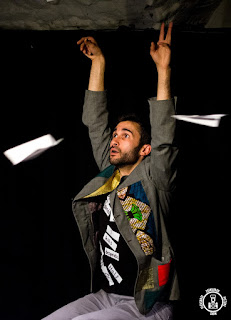 Sellman-Leava has cause to understand the pain of those who suffer at the hands of prejudice. His father is Indian and his mother English, and all his life he has been confronted with the question, “Where are you from?” He plays out a Tinder Dating Line experience with a member of the audience reading the words of “Gemma” who is convinced that Sellman-Leava is Indian, because of his colour and his father’s heritage. He recounts the bullying that he suffered at school because of people’s sheer ignorance and inability to understand or tolerate anybody who might be different.


Sellman-Leava’s impassioned accounts of bigotry and intolerance are spell-binding. His gift for oratory and debate is persuasively convincing as he highlights the absurdity of ignorant assumption. He cleverly evokes our reason and we are swept along by his committed mission to illuminate the injustice and cruelty of denying those who may be different the right to wear their label with pride and safe from intolerance. 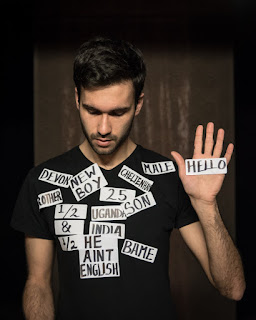 “Where are you from?” people ask, determined to label a person and define one’s own response to that label. “What is the difference?”, Sellman-Leava asks, between the 50,000 Indians driven out or tortured by the dictator Amin in Uganda, where his family lived at one time  to the hundreds of thousands driven from the war torn dangers of the Middle East . “Where are you from?” they ask, as if seeking to explain and justify the cruel and inhumane “justice” of Abbott’s turn back the boats policy or the offshore detention of refugees, men women and children seeking a better and safer life. “From Earth” comes the reply.
It is a powerful, moving and illuminating response. Sellman-Leava provides no answers, other than the one that pleas for change for the better. If one cannot act globally, perhaps one can act locally. Sellman-Leava is the combination of his mother’s name and a derivation of his father’s family name, Patel. “There are many Patels in England,” his father tells him, “but there are only five Sellman-Leavas” The name is a label that will bring them protection from the cruel words and actions of the bigots and the racists. 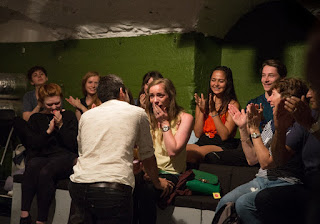 Perhaps Sellman-Leava is preaching to the converted, but if this insightful and intelligent performance, played out by an actor with enormous appeal, presence and intelligent, informed conviction can change the prejudice of a single member of an audience, then his campaign for tolerance and justice has been worthwhile. No wonder that Labels has won a host of awards at the Edinburgh and Adelaide Fringes. 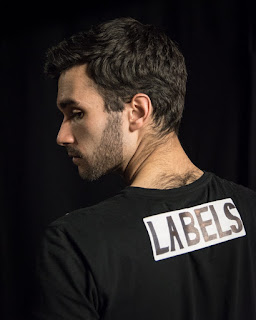