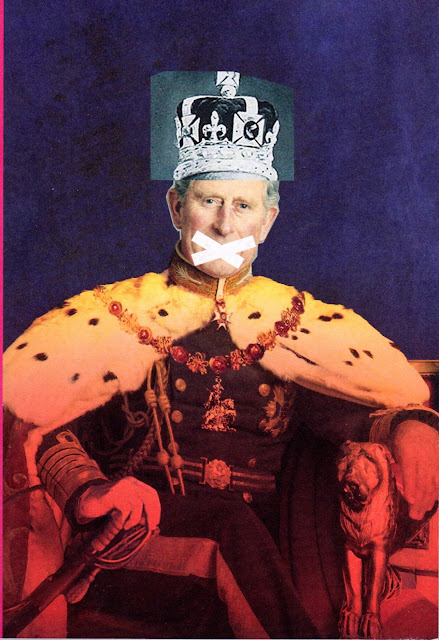 
All photos by Prudence Upton

I am literally in two minds about how to write about this terrific play.  The Almeida production of the play is excellent, too, whichever mind I’m in.  So if you want to stop reading here, just get along to see the show.  It will at the very least stir up your opinions on Republic Australia, and probably give you a perspective you may never have thought of.

I could place Bartlett’s King Charles III in the theatrical culture of Britain, which would necessarily entail links to the two other great British playwrights – George Bernard Shaw (in his less than well known play The Apple Cart 1929), and William Shakespeare (in his very well known Henry IV and V, mid-1590s, as well as Hamlet, Prince of Denmark c.1603).

I could legitimately do this at least because Bartlett has used the Shakespearean form, the iambic pentameter, to write the dialogue.  And it works a treat.

And, of course, the theme of queen and king-ship still sends people into paroxysms, even if not nowadays to nunneries.

On the other hand I could respond much more personally.  I arrived in Australia as a 14-year-old, out of the British working class (my father was a small scale sub-contractor in the plastering business – long before the CFMEU, of course).  The year was 1955. I had watched the coronation of Queen Elizabeth II on our new-fangled tele for more than 12 hours straight in 1952.  I was determined to escape the English class system where, despite my fair success at Grammar School the best I was likely to achieve would have been to become an electrician like three of my uncles.

Of course, I was a republican.  Who could seriously countenance the continuation of the monarchy in the land of Shakespeare and Shaw?

So I was quite disturbed towards the end of King Charles III to find myself almost with some sympathy for the current Prince of Wales (who in the play at one time forgets to include Wales in the United Kingdom!)  He becomes King immediately his mother dies, giving him no time at all to learn the ropes, which include always signing bills which have been passed by Parliament whatever he privately thinks of the new law.

The last time an English monarch refused to sign was 1708, when Queen Anne refused to assent to occupy Scotland with a standing military force (probably giving Bonnie Prince Charlie a bit of a better chance in 1745).  Of course, before that, when kings still thought they had the divine right to absolute rule, Charles I had his head chopped off in 1649, (while Charles II was so excited by his 12 years’ exile in France that he issued a royal warrant in 1662 declaring that in England all female roles should be played only by female actresses).

Charles III, for defying the will of Parliament as he does in the play, will almost certainly not be executed, but the problem for me was that his reason is because he supports freedom of the Press, while Parliament wants to put in place draconian restrictions and penalties, as a result of that dear old US citizen and ex-Australian Rupert Murdoch’s phone-hacking shenanigans.

I do not want to reveal what does happen in the play, but I can say that Mike Bartlett is much braver than Bernard Shaw or William Shakespeare.  WS, of course, could have had his head cut off if he had put Queen Elizabeth I and James I (VI of Scotland) on stage when they were still alive.  Or recently dead, even – Anthony Burgess (in his Shakespeare 1970) noted after her death in 1603 “The actors had to have their eyes on him who entered next.  Ten years were to go by before Shakespeare, in Henry VIII, just before the Globe was to go up in flames, presented those past glories [of Elizabeth’s father] as future ones.”


Bernard Shaw’s King Magnus upsets the apple cart in a fictional Romanesque setting, by presaging – perhaps – the future of abdications after 1929.  Except that “In 1936, a constitutional crisis in the British Empire arose when King-Emperor Edward VIII proposed to marry Wallis Simpson, an American socialite who was divorced from her first husband and was pursuing a divorce of her second” https://en.wikipedia.org/wiki/Edward_VIII_abdication_crisis , while King Magnus abdicates with the intention of standing for election to Parliament.

Shaw wrote comedy, so I didn’t have to feel sorry for King Magnus when he cleverly announces:

MAGNUS:    My last act of royal authority will be to divest myself of all titles and dignities; so that I may step down at once into the position of a commoner.
BOANERGES:  Step up, you mean.  The common man is the superior, not the inferior, of the titled man........

PROTEUS:    [To the King]  I say, whats the game?
MAGNUS:    There is no imposing on you, Prime Minister.  The game is, of course, that when I come back into politics I shall be in a better position as a commoner than as a peer.  I shall seek a parliamentary seat.
PROTEUS:    You in the House of Commons!
MAGNUS:    [blandly]  It is my intention to offer myself to the Royal Borough of Windsor as a candidate at the forthcoming General Election.......[which he will have caused by having dissolved parliament].

So there we have it.  The last occasion I know of  when a representative of royalty effectively dissolved a parliament without being advised to do so by the Prime Minister was in Australia in 1975.  Long live Sir John Kerr!  I have never felt sorry for him!


In King Charles III, the one character (or rather real person as he in fact is) that I ended up feeling most sorry for was Prince Harry, who (in the fictional play) falls in love with a young woman republican.  He tries to persuade his father to divest him “of all titles and dignities” so he can become a commoner and live a normal life with Jess.  Like his namesake, the young Prince Harry before he became Henry V, Bartlett's Harry has to do the equivalent of Shakespeare’s Harry’s denial of Falstaff, and, dressed in full rig (looking to me rather like Libya’s Gaddafi), he has to tell Jess he must support his brother and the monarchy.

In reality, the sorrow I felt was for Jess, and for the Britain that cannot divest itself of monarchy.  I’m old enough now not to be around for very many more years, but as Queen Elizabeth approaches 90 and I hope to have another 20 years if I’m lucky, maybe I’ll live to see what really happens to Charles, Diana’s sons William and Harry, their wives Kate and Chelsy (or Cressida, perhaps?), when the current phase of constitutional monarchy comes to end.

At this point in time, the play’s the thing wherein [you]’ll catch the conscience of the king.  You only have till the end of the month, but the trip to Sydney is well worth it.  On the way, check out the freedom of the press at http://www.dailymail.co.uk/news/article-3423700/Has-Charles-Diana-s-toxic-divorce-scared-Harry-marriage-life-party-loving-crowd-settles-Prince-s-friends-ask-terminally-single-royal-love.html