The selection of the romantic burnt-out Dome at Mt. Stromlo Observatory, with its magnificent valley views enhanced by a spectacular sunset, was an inspired choice by dance-maker, Alison Plevey and her Australian Dance Party in which to present her latest site-specific work, “Nervous”.

Seated in two rows around the inside perimeter walls of the roofless dome, the audience was able to experience the twilight transition from sunset to starlight as the performance progressed.

Two imposing concrete structures which once supported giant telescopes provided a striking sculptural setting for the performance which began gently with the four dancers, all costumed in identical stylish white slacks and singlets, topped with nude string mesh overshirts, pacing in different directions around the central performance area.

Occasionally they confronted each other with long gazes. As the pace quickens the performers began moving backwards, sometimes circling each other and at other times colliding. In this setting it was easy to image that they represent the universe. Eventually they all collapsed to the floor, heralding the beginning of a beautifully constructed adagio in which the four dancers moved in perfect unison.

An entertaining interlude commenced with Janine Proost desperately self-censoring herself as she attempted to make a statement, brilliantly illustrated the disabling effects of extreme nervousness.

In her program notes Plevey states “Nervous is about the human state and today’s volatile world …. An interrogation of what makes us nervous”. How she explores this proposition in abstract dance terms makes for a stunning work which was often as puzzling as it was fascinating to watch.

Superbly performed by Alison Plevey, Gabriel Comerford, Olivia Fyfe and Janine Proost, “Nervous” incorporates a remarkable electronic soundscape by Ben Worth, which set the mood for the various sections. Sometimes it was gentle and lyrical, at others the bass was so loud that it could actually be felt vibrating through the body.

Spectacular laser lighting and projections by Robbie Gordon effectively highlighted the drama of the surroundings, but occasionally left the dancers in the dark, most notably for the final tableau.

However, with the originality of its concept, the uniqueness of its setting, and the excellence of its execution, with “Nervous”, Australian Dance Party confirms its promise of becoming an important new vehicle for contemporary dance in the A.C.T. 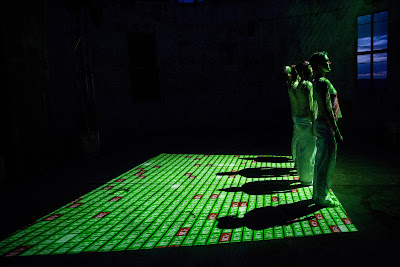