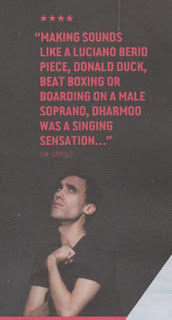 How to describe this exhibition in the “Memory Museum” is my first challenge.  It’s essentially a soundscape which at first is intriguing, being created by a spotlit Dharmoo live on stage in front of a blank screen from which emanate mysterious background noises which may or may not be related to the live sounds.  Weird rather than dramatic at this stage.

The audience of about 40 sat waiting, politely, unsure how to respond.

Fortunately, completely serendipitously, I realised I had two anthropologists sitting next to me (from ANU and Macquarie Uni).  They had been talking of David Williamson’s Heretic, of Margaret Mead and Derek Freeman.  I had reviewed that play (Canberra Times: Sydney Theatre Company at the Canberra Theatre Centre, Wednesday June 12, 1996.  Directed by Wayne Harrison.  Available at www.frankmckone2.blogspot.com) and knew the arguments about anthropologists making ludicrous assumptions about “primitive” societies, and being taken for a ride by the not so naïve “subjects” they interviewed.

Dharmoo’s “exhibits” were “mouth sounds”, perhaps forms of music, perhaps proto-languages from a series of rare populations, each with a very odd name.  Real or fictional?  We could not be sure as apparently academic experts appeared on screen giving their interpretations of these societies based on their cultures as expressed in their sounds.

At last one drought-stricken society’s ceremonial singing under water (Dharmoo bubbling and spluttering with his face in a bowl of real water) gave the game away.  Our laughter took over and became the dominant feature of the drama from this point.  It was such fun be fooled so cleverly.  My anthropology neighbours laughed loudest.  Dharmoo finally, in his role as a charismatic “primitive” persuaded us to participate in a kind of part-singing/mouth-sound-making session.

Through the laughter a theme began to develop, which could be seen to diverge. On the one hand we found ourselves enjoying making fun of the pretensions of “Western” style anthropology – made even funnier for those who spoke French, though my academic neighbours said the subtitles were pretty good.  As we all knew, especially all the academics in this audience at Sydney University’s Seymour Centre, French speaking anthropologists are the most pretentious.  I gather, too, the joke is particularly humorous in Canada, at least in English speaking regions.

But a twist came when the names and qualifications of the “specialists” appeared on screen.  One was no better than the worst of all politicians – a seriously condescending and dour faced commentator earlier in the “exhibition”, she turned out to be the Minister for Assimilation.  The implications for Dharmoo’s home country, Canada, are hardly less damning than for any number of our politicians here in Australia when we consider the attempts to “breed out” Indigenous people and devalue their cultures over the past two or more centuries.  For me the laughter was brought to a sudden and upsetting halt at that point.

But it was this point that gave the drama strength.

Sound and video design and editing, and the acting on screen, matched the intensity and originality of Dharmoo’s performance, which was quite extraordinary, ranging from harmonic throat singing through to an amazing array of clicks, blurps, implosives and explosives, all accompanied by physical forms, movement and rhythms far beyond what I thought any normal person could be expected to display.

For my first show from the 2017 Sydney Festival, Anthropologies Imaginaires was a terrific lead-in – exactly why we should bring in acts from other cultures to show us new artistic possibilities. 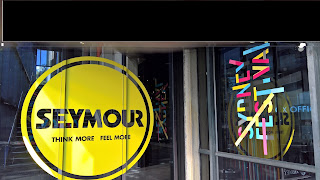 Posted by Canberra Critics Circle at 12:35 AM