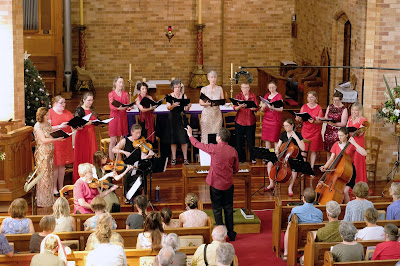 The hot day provided an appropriate Venice lagoon-in-summer atmosphere in St. Paul’s Church, Manuka for AdHoc Baroque group’s afternoon concert.  Beginning in 2016, the group has specialised in performing vocal music from the baroque age.  This concert focussed on works by the well-known Antonio Vivaldi and the not so well-known Baldassare Galuppi.

In the 18th century, Galuppi was one of Europe’s most famous opera buffa composers as well as a composer of liturgical works.  His music is now being rediscovered.  The two Galuppi works presented in this concert had not been published before.

Commencing with his ‘Confitebor Tibi Domine’ (I acknowledge you, O lord), soprano Greta Claringbould and mezzo-soprano Maartje Sevenster sang with confidence and precision.  The blending of their voices in the duets was especially fine.
Next on the program was Galuppi’s ‘Ave Regina Coelorum’ (Hail Queen of heavens), an uplifting and beautiful work sung beautifully by Maartje Sevenster.

The first of the Vivaldi works on the program, ‘Nulla in mundo pax sincera’ (In this world there is no honest peace) seemed to have a richer sound compared to the works of Galuppi.  Maybe we are just more familiar with the sound of popular composer Vivaldi?  Greta Claringbould gave a fine performance of the work, especially the final section after the recitative.

The second half of the concert was devoted to Vivaldi’s ‘Gloria’, composed in the early 1700’s for the Pietà, one of the four orphanages in Venice that were famous for their musical training and performances by female voices.

The soloists were joined by a 10 member female choir and oboe and trumpet were added to the orchestra.  The complexity of the music made it sound like it was a much larger choir than it was.  The orchestra under the direction of Peter Young gave a fine accompaniment to the singers.

The solo by Greta Claringbould, nicely accompanied on the oboe by Chayla Ueckert-Smith, and the solo sung by Maarte Sevenster with the chorus were the highlights of this sumptuous work, completing a memorable concert.

Photos by Peter Hislop
This review was first published in the Canberra City News digital edition of 18 December 2017.

Len Power’s reviews are also broadcast on Artsound FM 92.7’s new ‘On Stage’ program on Mondays from 3.30pm and on ‘Artcetera’ from 9.00am on Saturdays.