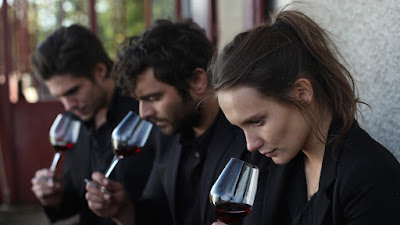 There’s a familiar face in the background in Back to Burgundy. An actor often seen in French films, but his name may not be front of mind. It will be from now on, because Jean-Marc Roulot is a winemaker and this delicious new film from Cedric Klapisch was filmed on his estate.

Roulot is cast here as the estate manager. He is not a central character but he has supplied the vineyard location and intimate, vigneron knowledge to help make this blend of family relationships and vigneron documentary such an organic and authentic pleasure.

The director and co-writer Klapisch has shown great flair for stories about young adults, characters trying to work out how to live their lives. Romain Duris has featured in his best-known films - The Spanish Apartment, Russian Dolls and Chinese Puzzle – as a young man with one too many options. It’s the youthful dilemma that Klapisch gives such a generous and empathetic treatment.

The gentle hills of Burgundy are a long way from Paris and all that the city offers, but peaceful rural settings can have problems of their own. Here it’s the transferral of vigneron tradition on a family estate to three adult siblings.

Their father has just passed away. On a practical level, when is it best to harvest, this Thursday or next week? Where is the best spot to start? Stems on or stems off in the vat? And, who is in charge here anyway?

The eldest sibling, Jean (Pio Marmai), has just turned up unannounced after a long absence. He has a small vineyard back in his new home in Australia and a partner there and young son, he but cannot adequately explain away his silence over the last ten years. His sister, Juliette (Ana Girardot) and his brother, Jeremie (Francois Civil), the youngest, aren’t ready to forgive him straightaway.

Now back in France, Jean has a new set of issues to resolve long-distance, but he wields his phone this time, in endless conversations with Alicia (Maria Valverde) in Australia. It’s an opportunity to have a bit of fun at Jean’s expense.

Some of the family tension is deeply felt but a far cry from a recent French film set in a family vineyard, You Will Be My Son, directed by Gilles Legrand. It is also driven by a father-son feud and events there unfold in very chilling circumstances indeed. Jeremie’s father-in-law, Anselme (Jean-Marie Winling), is another exacting, autocrat of the vineyard. What is it with the older generation of vignerons? 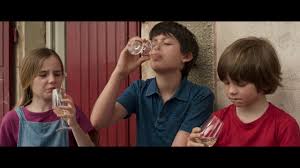 Flashbacks in Back to Burgundy unpack the issues, more or less, but scenes set in the past have been thrown into the mix, without being coded past tense and it doesn’t make for awkward transitions between timeframes. I was also left wondering why the hand of the dying father – all we see of him in palliative care – is not the hand of an obviously older man. These visual points are not critical, but the casual airiness of the piece and its spirited ensemble performances are, in my view, let down by some lack of attention to detail.

In other ways, the film’s aesthetic contributes a great deal with beautiful exterior scenes, high-angle and from unexpected perspectives. The way the end of harvest party is captured is a triumph. Klapisch knows how to party.

Alexis Kavyrchine’s camera captures the tangled web of familial relationships, from tightly experienced interiors to the panoramas of vineyards spilling over rolling hills. With her documentary eye, she also captures aspects of the winemaking process in such a way that it is easily integrated into the narrative.

As Jean stays on over the course of a year, the camera goes wide to reveal the four seasons. As everyone gets on with the things that need doing, the seasonal rhythms seem somehow to help the healing process.

It’s easy to miss, but there is a little jibe: wine isn’t given enough time in Australia, Jean should know. Something for vignerons to argue over after the closing credits.

Also published on Jane's blog
Posted by Canberra Critics Circle at 11:31 AM