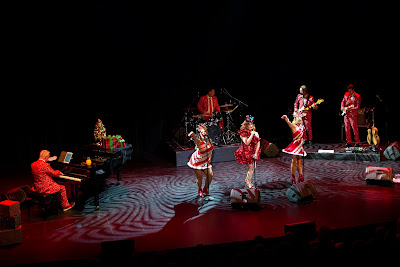 The Divine Miss Bette is back in the person of the divine Catherine Alcorn – all glitter, all tinsel and sparkling with talent. Over two hours, Alcorn minces and mocks and belts out her big voiced tribute songs, backed by her backing singers and band under the musical direction of  pianist Michael Tyack. It’s Christmas and Alcorn is on fire to set your spirits jingling with Bette Midler favourites such as Boogie Woogie Bugle Boy From Company B, In The Mood and the Jingle Bell Rock. Before you know it the arms are swaying  the voices singing on cue and the hands clapping in rapturous applause. Alcorn’s mimicry is magical. She doesn’t channel the brash and bountifully boisterous Bette, She inhabits her from the rousing rendition of Helen Reddy ‘s Delta Dawn to the contagiously swinging melody of Bobby Freeman’s Do You Want To Dance to the enticing From A Distance.
Bewitching as ever, Alcorn with the bubbly, bouncing effervescent and highly talented Harlettes Clare Ellen O'Connor and  Kirby Burgess as her hilariously playful backing singers puts on a Christmas special of Yuletide proportion, making spirits bright. Nothing can faze her backing band of Musical Director on piano Michael Tyack, drummer, Geoff Green, bass Crick Boue and   guitarist Tommy Novak. Whatever request the excited audience can throw at them, they pick it up with ease and confidence. The Divine Miss Bette Christmas Special  is a gift-wrapped evening of sheer revelry in which the audience are as much a part of the party as the performers on the festooned stage of Christmas decorations. lights and trees, supplied by Hang Ups of Fyshwick all topped off by Eclipse's festive lighting effects .


A heckler hurls a jocund heckle, instantly  countered with a quick quip from the lip. Alcorn bats it back as good as she gets . She’s the sexy sasy siren with the chauntese chutzpah.  I could have done with a little less of the audience participation and more of the music from this bnrilliant company of artists.  The hilarity hits the spot though when Burgess and O’Connor dressed as larger than life Christmas crackers flounce through the audience hurling crackers while Alcorn, dressed as a Christmas present over a Santa outfit a la White Christmas mode sidles up for a bit of a chat. The front row banter, the borderline tease and the FU throwaways are all good-hearted fun and the opening night audience were fully in the mood. 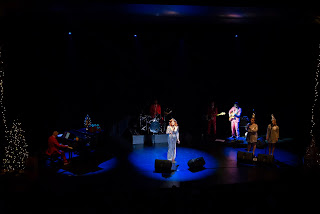 So much so that they didn’t want to let their diva go and Alcorn proves herself a generous dispenser of endless encores. Of course, there’s only one that the eager aficionados want to hear after all the covers, all the vulgar Sophie Tucker blue jokes to make the Ladies and Germs blush and squirm, all the banter and fast  track costume changes until she stands resplendent in a full length silver dress, a shining icon of fashion and style. We know it’s coming, that unmistakable signature song that marks Alcorn as a shining star with the audience wrapt in her thrall. Lovers of Bette Midler, Festive Season revellers and Christmas carol choristers and tongue in cheek tricksters with a penchant for the double entendre will have a ball at The Divine Miss Bette’s Christmas Special. If you’re in for a riotous romp and a dynamo dose of Christmas cheer, then don’t miss the dinner and show package or just the show at  The Q’s end of year offering .