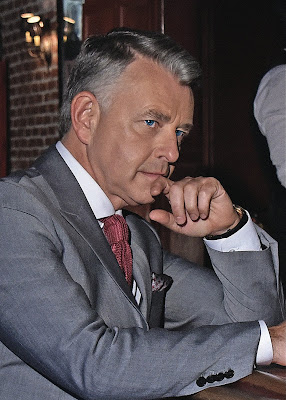 It’s 1971 and Ol’ Blue Eyes is wowing the crowd in the Purple Room in Palm Springs. Bill Miller accompanies the old favourites on the piano. This is the self-confessed saloon singer’s favourite spot and he croons the popular melodies with the svelte Sinatra sound. At the bar, Tony Curreri keeps the Jack Daniels coming.
Flash forward to 2020 and living personification of Sinatra, Richard Shelton wows a Fringe audience in the Spiegel Zelt at the Garden of Unearthly Delights. The night is growing chilly outside but inside Shelton’s appeal and friendly rapport soon warms  the hearts of the Sinatra fans. Shelton is Sinatra and Raw Sinatra is his tribute to a legendary entertainer for whom he obviously has enormous love and respect. His arrangements of such favourites as A Very Good Year, I’ve Got You Under My Skin, That’s Life and My Way reincarnate Sinatra’s seductive charm. The renditions glide and soar through the Spiegel Zelt, gathering momentum and power to the stirring rendition of  That’s Life and carrying the transfixed audience back to the intimate atmosphere of the Purple Room all those years ago. To watch the singer is to remember Sinatra in his mature years, self-possessed, assured, confident and in control, quick with a quip and fiery if fools should cross his path. Shelton’s one hour cabaret show is all of this and more. He is Sinatra here and now and every song opens the memory to a man who lit up the world of entertainment.
Raw Sinatra is not simply a song recital, a trip down memory lane through Sinatra’s popular repertoire.   Shelton intertwines the songs with anecdotes and accounts of Sinatra’s colourful and sometimes turbulent life from his first professional role in 1936 to his Purple Room concert of 1971. Shelton introduces himself as Sinatra at the same age and accomplished jazz pianist Mark Ferguson as his 1971 accompanist Bill Miller. The audience is in for a fascinating, entertaining and alluring biogig, and though some may have seemed surprised, none was disappointed. Shelton held them in his thrall.
Right from the start, Shelton made his audience feel as if at home in Sinatra's beloved Purple Room. He welcomes Gina Lollobrigida and Carey Grant in the front row and launches into the rousing All or Nothing At All, Sinatra’s first 1939 recording with the Harry James Orchestra.  That’s all it took for the audience to be quietly humming away. Shelton is the seductive medium and Sinatra his spirit Muse.
The numbers keep coming as do the sips from the constantly filled glass of Jack Daniels  . The songs are accompanied by anecdotes of his escapades with the notorious Rat Pack, his battles with movie mogul Louis B Mayer, his fury at rumours of his association with the Mafia and most of all, his love affair with legendary screen goddess, Ava Gardner. Shelton captures the very essence of Sinatra’s aching heart in the a capella rendition of My Foolish Heart that Sinatra sang from his balcony at the Sunset Towers to Gardner’s bungalow below.
Shelton could not finish this captivating show without Sinatra’s signature tine, and the audience hung on every note of My Way, the inspirational song that will always be Sinatra’s life lesson to his adoring fans. Shelton has captured the life and songs of the great entertainer and has done it his way.
Raw Sinatra sung and spoken with such charm and style by Shelton is a cabaret gem. It was a little subdued by a quiet senior audience, a keyboard, rather than an upright or a grand and the smaller style Spiegel Zelt (Tent). This is a show that would be a hit at the Adelaide Cabaret Festival, and I hope that Shelton may be lured back from LA to perform in the true setting of  cabaret.
As a parting gesture, Shelton aka Frank Sinatra invites any requests. “New York New York” some cry out. “I haven’t written that yet” Sinatra quickly replies. “It’s a good idea” And with that he leaves his audience wanting more, as every fine entertainer should.