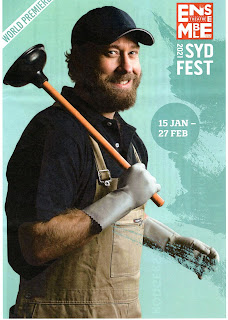 Kenny adapted for stage by Steve Rodgers from the movie Kenny (2006) by Clayton and Shane Jacobson.  Ensemble Theatre, Sydney, January 15-27, 2021.

I arrived early, knowing everyone had to QR Covid check-in.  With time to spare, keeping my distance, I took a turn outside.  A pleasant cool sea breeze – Ensemble was once a boatshed – and a surprising announcement.  Welcome to IPSC, the International Portable Sanitation Convention.  Woops!  Isn’t Kenny on after all?

Even more surprising when I find after the show that SPLASHdown Corporate Bathroom Rentals is real, and are given special thanks for their expert assistance. 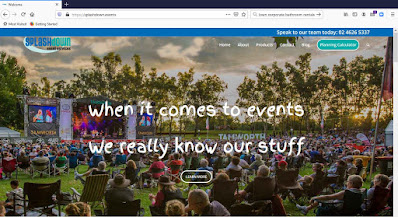 I guess that was for providing the portable toilet that Kenny persuaded an audience member, Paul, to put his arm down.  He had to retrieve the big stuff first – a bottle of wine as a reward for his bravery – until he found the wedding ring, just like the one Kenny had had to retrieve in his story of the woman who lost hers down the toot – and then couldn’t touch it, even though he sterilised it, until he wrapped it in toilet paper, leaving without thanking him because she couldn’t stand his smell.

We were, of course, all attending the IPS Convention.  Kenny was certainly the most entertaining keynote speaker I’ve ever come across.  In fact he came across as among the most humane and sincere.

I have never seen the movie, I think fortunately.  In this adaptation, where Kenny tells us all about his experiences, and even his personal and family responses, in professionally providing and servicing portable toilets to large gatherings around the world – rather than our being voyeurs watching a movie – it seemed to me that Ben Wood was the real deal.

At the end of this comedy with serious implications, I felt as much respect for the plumbers on whom we all rely – and for all those other frontline workers we have all become so suddenly aware of through this pandemic – as I felt for the actor.  Wood’s representation of all the layers of Kenny’s emotions, second by second, as he works directly with us as participants, was quite extraordinary.  When he showed us the slide of the women toilet cleaners – the Untouchables, of course – in India, I felt as everyone did around me, for their awful plight, with a sense of guilt for our easy lives.  Then, I realised, that Sulabh International, to whom Kenny asked us to consider donating, is real.

Sulabh International “is an India-based social service organization that works to promote human rights, environmental sanitation, non-conventional sources of energy, waste management and social reforms through education. The organization counts 50,000 volunteers.”  Suddenly Kenny and Ben Wood are one.  The fiction of theatre becomes real in the world.  [en.wikipedia.org/wiki/Sulabh_International]

I have noted before the work of Steve Rodgers in working directly with his audience in Duncan Macmillan’s Every Brilliant Thing at Belvoir (reviewed on this blog January 12, 2020) and I’m sure I see a link when Kenny gives out cards recording children’s responses to the question “What do you want to be when you grow up” for people in the audience to read out.  When it is revealed that none of them wanted to be a plumber, the point is made about dignity of the person and dignity in their work.

So this production of Kenny is both highly entertaining, as I’m sure the movie is, but even more engaging because of our personal interaction with Kenny’s very-Aussie character full of positive humour and because we become committed to humanitarian ideals like those of Sulabh International.

When I say “not to be missed”, I really mean it.  And am I glad to be back in a live theatre!