The Twins - Truer than Fiction 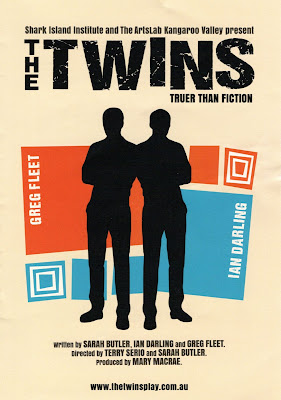 Reviewed by Frank McKone
May 3

Ian Darling, “an award-winning documentary filmmaker, who returns to the stage for the first time in 40 years”,  and Greg Fleet “an award-winning actor, comedian, playwright and author” are apparently preparing to rehearse the roles they played together at school all those years ago – the twin sons of Ægeon, who is a wealthy merchant from Syracuse,  in Shakespeare’s The Comedy of Errors; both of whom are known as Antipholus.

In Act I, the racist Duke of Ephesus demands:
“Well, Syracusian, say in brief the cause
Why thou departedst from thy native home,
And for what cause thou camest to Ephesus.”

Ægeon, explains the long and complicated story in which he adopts a pair of twins from a poor family (each become known as Dromio) and how by accidents at sea on his “prosperous voyages”, he and his wife, each with one son and his attendant, become separated.  So we end up with Antipholus (and Dromio) of Syracuse, at the age of 18, going off to search for their twins Antipholus (and Dromio).  As we find out much later, they are in Ephesus, where the Duke, though sympathetic, has just jailed their father, after

“Five summers have I spent [searching] in furthest Greece,
Roaming clean through the bounds of Asia,
And, coasting homeward, came to Ephesus
Hopeless to find, yet loth to leave unsought.”

But, in keeping with the Australian government, that’s the law, says the Duke : “Which princes, would they, may not disannul.” I have to do this to you: “Yet I will favour thee in what I can.”  Refugees still effectively held in Papua New Guinea and Australians trapped by Covid in India will surely understand.

The Twins is an 80 minute journey of discovery about what actually happened to Ian and Greg when they were separated after school.  They never get around to performing more than a few snippets of Shakespeare’s play – mainly bits of their “father’s” speech.  This becomes significant because both of them seem to have been unduly influenced by their real fathers’ expectations and lifestyle.

Perhaps the most interesting issue that divides them, as they argue about what they think they remember, is that Ian comes from a wealthy family who buys his private education, while Greg from a poor and dysfunctional family seems to have got to Geelong Grammar on a scholarship.  Ian, it seems, was the real Antipholus, while Greg was really a Dromio.

I have in mind that Act II of The Twins might be to work up a piece from the Shakespeare.  Perhaps we could see the two families, based upon Ægeon’s emphasis on his loving wife with a strong sense of responsibility equal or more than his own, compared and contrasted with the Dromios’ mother who, says Ægeon, was

“A meaner woman [who] was delivered
[in the same inn where his wife became
A joyful mother of two goodly sons]
Of such a burden, male twins, both alike.
Those, for their parents were exceeding poor,
I bought, and brought up to attend my sons.

In other words the “meaner” woman had no option but to sell her children.

This story is relevant to Ian’s life because he says that he feels guilty for being so wealthy.  Has he, in real life, come to understand and live up to the goodness of his Shakespearean father and mother?  Antipholus of Syracuse is certainly rather like the stockbroker Ian says he became, but Shakespeare gives a different view of family life in Act II Scene I in the house of Antipholus of Ephesus, where Dromio is treated in the worst way as a slave; and bites back magnificently.

So, though the stories of Ian Darling’s and Greg Fleet’s adult lives are interesting, and their playing of themselves raises questions about the nature of being an actor, I felt they could have written a play incorporating what they have learned from playing Shakespeare with such a strength of mutual connection at the age of 16.

They write in the program “We have coined the term ‘theatre verite’ to describe this piece because it is a play, first and foremost, but the characters are real people and are also played by themselves.”  I have several times recently reviewed what I have termed “Personal Theatre”.  John Bell’s One Man In His Time takes up the Shakespeare theme, of course, but I think Stop Girl by Sally Sara has been the most powerful, alongside My Urrwai by Ghenoa Gela and Red by Liz Lea.

The Twins is given a structure, which raises social issues, making the play more significant than two guys nattering about their lives.  They begin and end with stylised statements that “I am a man” and “I am a white man”, implying that they recognise, for example, that they are not women and not diverse.  They also focus often on the question of being truthful and trustworthy, because being an actor can mean hiding the truth, and social prejudice can raise its head.  That raised for me the question that, having written this play and continuing to perform it, have they not changed simply as a result of this experience, especially working together after so many years apart?  Maybe the script will have to keep changing.

John Bell pointed out that you can only trust an actor to the extent that you know they are pretending.

So, though The Twins is not “great theatre”, it certainly can stimulate a lot of ideas.

Posted by Canberra Critics Circle at 10:14 AM