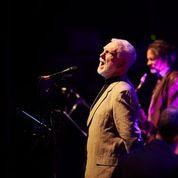 Vince Jones -The Art of Protest.

Two very distinct yet different songs of protest greet the audience as they enter the Dunstan Playhouse for the Adelaide Cabaret Festival performance of Vince Jones – The Art of Protest. One is the feisty, assertive and transformative roar for recognition, Helen Reddy’s I Am Woman. The other is the Paul Robeson gospel plea for release from the black man’s suffering, Swing Low Sweet Chariot. They serve as preludes to Vince Jones’s salute to songs of the Twentieth Century that shaped protest movements across the globe and played their part in changing the world. From Nina Simone’s Strange Fruit that became an anthem for the Civil Rights movement to Kevin Carmody’s  Thou Shalt Not Steal and Archie Roach’s heart-rending indictment of the Stolen Generation They Took The Children the repertoire illustrates a litany of shameful abuse. The performance closes with two songs by the poet laureate of protest songs. Bob Dylan’s If I Had A Hammer and Blowing in the Wind cry out for reform while the times are changing.

John Lennon’s Imagine epitomizes Vince Jones’s spiritual soul. Lennon’s protest is a plea for peace and harmony throughout a brotherhood of man. Jones’s jazz version, delivered without flair or ostentation, but simply from the heart with the brilliant backing in his jazz combo is the voice of gentle protest and of love, which in Jones’s persuasive and unique song will conquer all. Empathy and compassion permeate the selection. John Schumann’s I Was Only Nineteen for Redgum recalls the futility and loss of life in the Vietnam War. It is a plea for peace and cessation to conflict. As he sings in The Nature of Power “It’s the power of love, not the love of power. It is a theme that runs through the show.

A surprise inclusion in Jones’s repertoire is Pink’s questioning plea for humanity from George Bush in Dear Mr. President. It is a fearless rendition by a jazz singing legend who with age has found the voice of reasoned accusation. His anger is couched in the reason of logic and love. His voice, now brushed with the experience and wisdom of the years, is in perfect union with the band. It is as though we are hearing familiar songs for the very first time and that is the power that Jones has over us. Anger is replaced by love. Attack is replaced by reason and protest is inspired by hope.

Writer Brian Nankervis of Rockwiz hosts as a narrator, providing commentary on the songs and their originators. His background information is interesting, and he presents it with a commanding presence. Unfortunately it is in contrast to the more sensitive nature of Jones’s  interpretations and, rather than complementing Jones and the stunning musicians  John Mackey on sax, Ben Hauptmann on guitar, James Hauptmann on drums, Jacques Emery on double bass and musical director Matt McMahon on piano, Nankervis needed to gently lure us into the songs, rather than offer a domineering  account of the background to each artist and their song.

Ninety minutes is a short time to embrace the catalogue of protest songs that have changed the world, or contributed to the movements that have cried out for change. Members of the audience cried out requests but none would complain about the quality and emotional impact of The Art of Protest. For those of us who lived through this era we may lament the changes that have not come about and praise those that have in the knowledge that songs have made the world a better place. The Art of Protest and the evergreen talent of Vince Jones and his musicians attest to the power of protest to change the world through having a voice to be heard and a love to share.