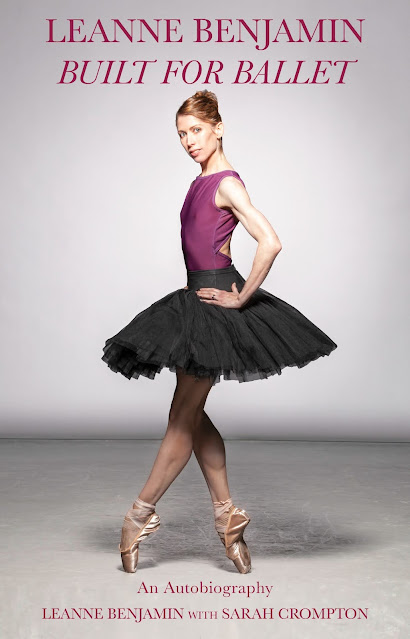 An autobiography by Leanne Benjamin with Sarah Crompton.

Life is full of co-incidences, and the release of this book in this particular month is one of the happy ones. In early November 2001, I was passing through London on my way home from attending the New York Cabaret Convention and reviewing the premiere by American Ballet Theatre of Stanton Welch’s ballet Clear.  Arriving in London, I discovered that Australian ballerina, Leanne Benjamin, was programmed to dance the lead in the Nureyev version of  Don Quixote.  Newly appointed Artistic Director of the Royal Ballet, Ross Stretton, had arranged to borrow the Australian Ballet’s sets and costumes, and for this performance Benjamin would be partnered by Cuban dancer, Carlos Acosta.

Never having seen Benjamin dance, but certainly aware of her from the reviews of her performances, the opportunity to actually see her dance, particularly with Acosta, was irresistible. I was also interested to see how the Australian production, with which I was familiar, would work on the Royal Ballet dancers, and of course there was the added lure of being able to experience the newly refurbished Royal Opera House.

Though the performance was sold out, I managed  to secure a ‘standing room' ticket to stand at the back of the Royal Opera House stalls. However my excitement was somewhat dampened on arrival by a notice advising that Miss Benjamin was indisposed and her role as Kitri would be danced by Romanian ballerina, Alina Cojocaru. So I never got to see Leanne Benjamin dance.

Although I never did get to see her dance, having just read Benjamin’s captivating account of her career,  which she’s written with dance critic and arts editor Sarah Crompton, I feel I’ve finally caught up with her, and even discovered the reason for her absence on that particular night in November 2001.

“Leanne Benjamin: Built for Ballet” is a fascinating no-nonsense account of the ups and downs of the life of a career dancer. In addition to her undoubted brilliance as a dancer, Benjamin reveals a talent for self-examination, able to assess her own and her colleagues particular talents and flaws with admiral clarity and perception.

Her knack of being able to verbalize her feelings, particularly with regards to her reasoning for some of the difficult decisions she’s had to make during her long career make fascinating reading.  Her advice for coping with the challenges of constant touring and her descriptions of what she has learned from the many dance luminaries with whom she has created and danced should be required reading for any young person contemplating a career as a professional dancer.

Born in Rockhampton, Leanne Benjamin, OBE, AM, is not as well known to Australian dance audiences as her illustrious career suggests she should be. That’s because most of her career has been overseas.

She quickly realised that she was never going to fit the traditional mould as a classical ballerina. Her sights were set on becoming a dramatic dancer. Nevertheless, following considerable success in International ballet competitions, by the time she was 18 she was dancing in the corps de ballet of the Sadler’s Wells Royal Ballet.

Initially attracted to the idea of dancing in America, the opportunity to dance more of the Kenneth MacMillan repertoire led to her decision to join the Royal Ballet in 1992. At the time Sylvie Guillem, Darcey Bussell and Viviana Durante were the reigning ballerinas. Ambitious, energetic and not afraid to speak her mind, Benjamin initially felt stifled by the rigid systems in place.

Choreographer Peter Wright described her as ‘the most difficult ballerina when it came to rehearsals, demanding time in the studio and on stage upsetting everybody’. She remembers Administrative Director of the Royal Opera House, Anthony Russell- Roberts, telling her in no uncertain terms when she was negotiating for more recognition, that if she wanted to stay at the Royal Ballet, she would have to accept that she would never be prioritised before Sylvie, Darcey  and Viviana.  Nevertheless, by the time she retired from the stage at age 49, she had been a principal ballerina at the Royal Ballet for more than 20 years.

Though she danced her share of ballet princesses, it was the story-telling aspects of the big traditional ballets that most interested her, particularly those choreographed by Kenneth MacMillan. She also revelled in the challenges offered by young emerging choreographers, and following early success  creating the role of Grete in  David Bintley’s  Metamorphosis,  went on to cement her reputation in works highlighting her unique athletic and dramatic gifts especially Wayne McGregor’s Qualia and  Kenneth MacMillan’s  Different Drummer and  The Judas Tree.

Benjamin commenced her ballet career during a golden period of British ballet, a time when the creators of some of the most iconic ballets in the current repertoire were still practicing.  Frederick Ashton coached her for a revival of his version of Romeo and Juliet, and Kenneth MacMillan coached her for his.  She much preferred the MacMillan version.  Their admiration for each other’s talents was mutual and MacMillan became her mentor and lifelong friend.   It was a MacMillan ballet, Mayerling that she chose for her final performance at the Royal Opera House in 2013. Her description of this event is particularly poignant.

MacMillan was not her only influence however. As is the tradition in ballet Benjamin was taught many of her roles by the dancers who had originated them. Antoinette Sibley taught her Ashton’s The Dream. Natalia Makarova taught her La Bayadere. Lynn Seymour coached her for McMillan’s Anastasia. Galina Samsova coached her for Swan Lake; Suzanne Farrell coached her for Balanchine’s Symphony in C.  For Firebird her coach was Monica Mason, who was taught the role by Margot Fonteyn, who in turn had been taught by Tamara Karsavina on whom the ballet had been created by Mikhail Fokine. Benjamin’s accounts of these coaching sessions are illuminating. Since her retirement Benjamin herself has become much sought-after coach.

Benjamin speaks glowingly of her stints guesting with the Australian Ballet under David McAllister’s directorship. She’s rather less effusive when talking of Ross Stretton who, when he was Artistic Director of The Australian Ballet and she was contemplating returning to Australia, refused to engage her as a principal. They appear to have forged an amicable working relationship later when he took over Artistic Directorship of the Royal Ballet.

Her list of dance partners during her career reads like a Who’s Who of male dancers. Jonathan Cope, Jose Carreno, Nigel Burley, Ethan Stiefel, Angel Corella, Carlos Acosta, Steven McRae and Irek Mukhamedov were all favourites. But it is Edward Watson who she credits as being her perfect match as a dance partner, able to challenge and compliment her in temperament, athleticism and artistry.

Far from a simply being a list of her triumphs, though there a plenty of those, “Leanne Benjamin: Built for Dance” captures Benjamin’s thoughts on many topics, including coping with injuries and touring,  the importance of strong family connections, and her marriage to theatre executive Tobias Round. She’s convinced that her best dancing was achieved in the ten years following the resumption of her career following birth of their son, Thomas.

Fortunately many of her performances are preserved on YouTube and DVD, and to be able to dive into them while reading her accounts of their creation added greatly to the pleasure of reading this book which I found difficult to put down once I commenced reading it.