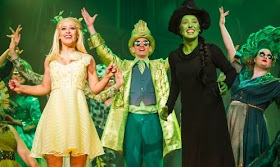 Wicked is iconic for its reversal of perspectives, casting The Wizard of Oz's nasty Wicked Witch as a misunderstood animal rights activist on the run from a totalitarian Wizard's mastery - not of magic - but of public relations.

Of course, it helps that the Munchkins who populate Oz are dopes, overgrown children more notable for smallness of heart than deficiency of stature.  The teenagers can be forgiven for their shallowness, but the only human adults we see are either resolutely selfish or devoted dandies.  The Wizard (Steve Amosa) is a colonial administrator, duping his charges by finding them scapegoats, in particular the talking animals who are being literally silenced under his regime.

But future Wicked Witch Elphaba (Loren Hunter) is marked as an outsider from birth, quite literally: her bright green skin and occassional freaky demonstrations of magical power have her feared and shunned in a society not notorious for much open-mindedness.  Loathed by her selfish family, she is made the drudge and carer for her pretty but crippled sister Nessarose (Teya Duncan).  They are sent to school together, we suspect not so much because Elphaba's family has great faith in her academic achievement but because she is expected to continue as Nessarose's indentured servant.

Born to relative privilige but also an outcast: the perfect education for a future revolutionary.

Although Elphaba takes up animal rights as her cause, the main influence she has is moral: popular girl Glinda (Laura Murphy) and pretty boy Fiyero (Drew Weston) through her example learn to care about something other than themselves.  The school-time escapades of the trio feel like a high school TV movie, in particular one extremely cliched moment where Elphaba is tricked into wearing an ugly hat to a big party.  But the songs that drive this sequence are fantastic, in particular "Dancing Through Life" and "Popular".  Laura Murphy's Glinda steals the show as the Valley Girl with enough nous to recognise her own cruelty and selfishness and overcome them.

When Elphaba discovers the secret perfidy of the Wizard - and, by extension, of all authority figures - she steals a magic book and goes on the lam, becoming Public Enemy Number One to the hysterically fearful Munchkins.  "Defying Gravity," famous both for its power and the levitation effect at its climax, is thrilling, especially because of the almost absurd level of persecution Elphaba endures before she finally stands up for herself.

Loren Hunter's Elphaba is a bit too put upon in the first act, a wounded puppy rather than a secret firebrand, but becomes fearsome when forced to become a hunted fugitive.  Hunter's voice however is fantastic though, and her many songs were a delight, whether the vengeful "No Good Dead" or the painfully ironic "The Wizard and I".  There are many amusing coy references to her apparently less creditable actions, but it is played here as though the camera only caught her at bad moments where she was a bit too snappish or impatient.

Wicked is a notoriously expensive and difficult musical to stage, and Free Rain's ambitious production is almost indistinguishable from a professional touring company.  The special effects are less impressive than what you would find in London, and there are fewer sequins on some of the costumes, but it has set a new standard for quality in Canberra musical theatre.  The cast all give performances that would be expected of professionals.  In particular the choreography, so often a weak link in local musicals that have to make trade-offs between acting, singing, and dance, is genuinely impressive.  Where budget constraints limit the set (although lighting tricks work to cover what is missing), some extremely vivid and impressive costumes provide a strong sense of place.

Where Wicked is a little weak is that it is almost too eager to please, although that may be part of the reason for its explosive popularity.  The happy end cop-out (an alteration from the book by Gregory Maguire that the musical is based on) feels good enough, but completely undercuts the carefully built tragedy.  Imagine if just before the duel in Hamlet his dad popped in, revealed he had just been on holiday in Acapulco the whole time, and they all went home.  Wicked consistently shies away from the darkness of the battle Elphaba is fighting - the only thing she does to try and change the system is negotiate with the Wizard on generous terms.

The production adheres closely to template set out in the professional productions (costumes, characterisation, and staging are as close as they can be within the limitations of the show's budget) - with the exception of Steve Amosa as the Wizard.  The Wizard is normally played as doddering and just a little silly, but Amosa's Wizard is masterful, a plausible strongman ruling with hefty machismo.  This was a striking interpretation of the character, as different from other incarnations as Elphaba is from the malignant harpy of the original Oz stories. His authority is so strong he almost doesn't need the giant mechanical head.

Wicked is by any reasonable standard a triumph, as near as it is likely for a hybrid amateur company to come to to the relentless polish of an expensive professional production, and within Canberra the only thing that really compares to it are Free Rain's prior productions such as the excellent Mary Poppins.  The only limitation is that it is too perfect an incarnation of long-running, highly polished show.  The musicals that loosen up and do something fresh with the source material are still valuable, for example Everyman Theatre's recent production of Company.  (To be fair, rights for a show are often accompanied by restrictions on what can be done with it.)

But even so, Wicked is suberb.  It fully merited the rapturous applause of its opening night and within Canberra musicals is unmatched for ambition and achievement.  Vibrant, entertaining, exciting and relatable, there is nothing guilty about this pleasure.
Canberra Critics Circle at 3:09 PM
‹
›
Home
View web version