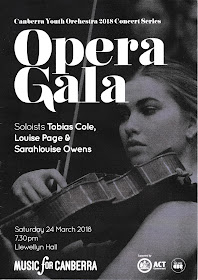 Canberra Youth Orchestra’s first concert for 2018 was an ‘Opera Gala’ with a fine program ranging from arias from Handel and Gluck to Von Weber, Donizetti and Verdi and some modern-day Kats-Chernin as well.

The program commenced with the finale of the William Tell Overture, rousingly played by the orchestra.  Then counter-tenor, Tobias Cole, took us into Handel territory with the first of three items from ‘Julius Caesar in Egypt’.  He sang ‘Va tacito e nascosto’ (Silently and Stealthily) with great feeling, accompanied by the fine trumpet playing of Samuel Hutchinson.

Tobias Cole was then joined by Louise Page for ‘Caro bella’ from the Handel opera. Their expert and emotionally truthful singing of this duet where Caesar and Cleopatra sing of their love for each other proved to be one of the highlights of the evening.

Sarahlouise Owens’ singing of ‘Sempre Libera’ from Verdi’s ‘La Traviata’ was thrilling and thoroughly deserved the thunderous applause from the audience.

The second half of the concert commenced with the orchestra playing Ernest Giraud’s ‘Carmen Suites’ from the opera by Bizet.  The Intermezzo was especially well-played.

Louise Page showed what a fine actress she is with her sublime performance of ‘Il dolce suono’ (the Mad Scene) from Donizetti’s ‘Lucia di Lammermoor’. She was accompanied superbly by Serena Ford on flute and the combination of voice and instrument was magical. The concert finished with all three soloists singing the celebratory ‘Brindisi’ from ‘La Traviata’ with great gusto.

The orchestra under the baton of Leonard Weiss accompanied the singers very well throughout the concert, especially the demanding recitative sections.

This was a delightful concert with three of Canberra’s most distinguished singers and a pleasing range of music from baroque to contemporary.

Len Power’s reviews are also broadcast on Artsound FM 92.7’s ‘On Stage’ program on Mondays from 3.30pm and on ‘Artcetera’ from 9.00am on Saturdays.
Canberra Critics Circle at 4:47 PM
‹
›
Home
View web version