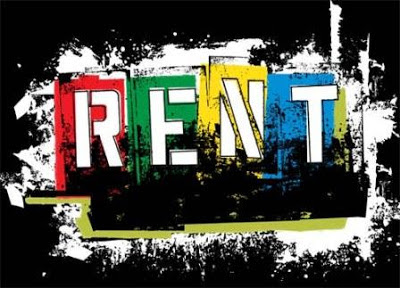 ‘Rent’, the musical, was a phenomenal success on Broadway for 12 years.  It had a short professional season in Sydney and one previous local production in Canberra.  The original Broadway production gained some unfortunate publicity when the show’s writer, composer and lyricist, Jonathan Larson, died shortly before the show’s premiere.

Based loosely on Puccini’s opera, ‘La Boheme’, ‘Rent’ tells an updated story of a group of friends living in poverty in New York City’s Greenwich Village with the shadow of AIDS hanging over them.

It’s a curious musical, one minute following the traditions of a Broadway musical and then at other times making its own rules, for example, abrupt endings to songs and scenes giving them an oddly unfinished feel.

Jarrad West, the director, who also performs the role of Tom Collins, has given us a solid, enjoyable production with deep characterisations from the cast of about twenty.  Everyone onstage has their moment to shine but particularly noteworthy was Adrian Flor in the transgender role of Angel – his solo, ‘Today for You – Tomorrow For Me’ was exceptionally well sung and danced.  Vanessa De Jager as Mimi, Jarrad West as Tom Collins and Mathew Chardon O’Dea as Mark also impressed with their strong performances.  The songs, ‘La Vie Boheme’ and ‘Seasons Of Love’ are superbly sung by the entire company.

Jordan Kelly has outdone himself with his masterful choreography for this show, particularly in ‘La Vie Boheme’.  Everyone in the cast has been given individual movements during this song that suit their characters and the total effect is breath-taking.

Nick Valois’ set successfully creates a down-and-out, ugly environment using scaffolding.  It has some awkwardness with an acting space in one corner which seemed a bit lost and underlit.  Some staging choices by the director also didn’t work, especially where one of Vanessa De Jager’s songs had to compete with the distraction of three dancing girls on a platform.

The music director and keyboard player, Nick Griffin, achieved the right sound for the show from the band of six players.  However, the sound level of the band swamped the singers so much that the lyrics were unintelligible for much of the show.  Whatever the cause of this, it’s a major problem and a great pity when all other elements of the show have come together so well.  Hopefully it can be fixed for the remainder of the season.

Apart from the sound level problem, this is a very enjoyable, visually exciting, moving and memorable production.
Posted by Canberra Critics Circle at 11:28 AM