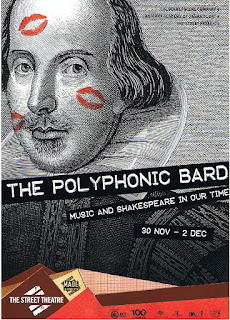 The Polyphonic Bard – Music and Shakespeare in our time The Pocket Score Company and Canberra Academy of Dramatic Art, directed by Tamzin Nugent.  Made in Canberra Season at The Street Theatre, November 30 – December 2, 2012.

This was my introduction, in 1963, to the fascinating strange harmonies of Renaissance songs, beginning with the ironic humour of “We Be Soldiers Three” included in this Pocket Score show.  One song not included, which I would have loved to hear and see performed, is Ben Jonson’s “Have You Seen But A Whyte Lily Grow”, a great deflator of the conventions of romantic love which would have fitted so well in this program.

And what an odd but interesting program this is.  It certainly fulfils the Made in Canberra description of diverse works mixing up new ideas in theatre, music, dance, opera, and interdisciplinary work in live performance.

I saw The Polyphonic Bard as having two purposes.  It is an “entertainment”, which means a lot more than being merely entertaining.  There are light-hearted episodes here, but set among themes concerning the nature of love, life and even death.

For the young students of the Canberra Academy of Dramatic Art, the top-quality 5-part singing of the Pocket Score team – David Yardley (countertenor), Paul Eldon (tenor), John Virgoe (tenor), Daniel Sanderson (baritone) and Ian Blake (bass) – provides a model for them to aspire to.  They have a long way to go at this point in their quest, but this public performance is an important step along the way.

Once upon a time, when I trained young people for tertiary training auditions, requiring a Shakespeare piece, of course, I used to explain how 5- or even 8-part singing took place in the pubs of London in Shakespeare’s day, and how those complexities of rhythm, harmony and stress patterns underlie the poetry of Shakespeare’s words.  These CADA students are lucky enough to learn in practice, from the Pocket Score Company, what I could only explain to my trainees.  But, of course, in today’s theatre world, all professional actors must be able to sing well.

Though the show is indeed “diverse” and a “mixing up”, the audiovisual and photographic work of Aaron King and Danielle Osomanski – not exactly of Shakespeare’s time – often added images to the speaking and singing.  Particularly effective, I thought, was video of (I assume) swirling drops of coloured inks, which metaphorically represented ideas in the words, especially when red seemed to show the blood of warfare.  This brought the experiences of Shakespeare’s period of history into the present – artfully, rather than as a blunt instrument, in keeping with the choice of sonnets and comedy in the spoken word.

I wasn’t so sure of the success of the use of hanging ropes – literally with hangman’s nooses – which provided something for the actors, and sometimes even the singers, to hang on to.  It is a simple idea (that means a good idea) and certainly raised thoughts of dangers, social strictures and death, behind words of comedy and love, but a choreographer was needed to work up a movement design which could have lifted the actors’ performances more “artfully” to match the video.

So, once again I have to thank the recently announced Artist of the Year, Caroline Stacey, for instituting the Made in Canberra program which “through partnership relationships...puts a spotlight on independent artistic activity in the ACT and has continued to evolve in response to artists’ needs and Canberra’s creative context”.  It does indeed, and The Polyphonic Bard is a good example.

Posted by Canberra Critics Circle at 10:50 AM