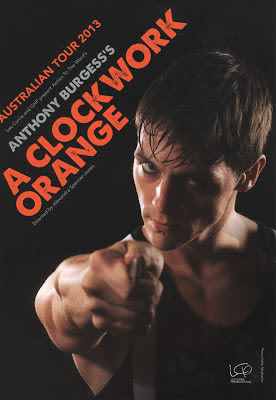 Written by Anthony Burgess
Directed by Alexandra Spencer-Jones
Presented by Les Currie and Glynis Henderson Productions
Canberra Theatre Centre, The Playhouse
May 22 to 25 May, 2013

‘As queer as a clockwork orange’ was the Cockney slang that gave Anthony Burgess his title for his 1962 novella, ‘A Clockwork Orange’, which targets youth violence, free will and behaviourism.  Stanley Kubrick’s 1971 film of the same name, based on the novella, was a sensation at the time of its release and is now considered a classic, but was dismissed by Burgess as ‘badly flawed’.

According to the director, Alexandra Spencer-Jones, the stage production now touring Australia from Great Britain is using a playtext written by the late Anthony Burgess himself, who was tired of companies bending his novel ‘out of shape’.

Martin McCreadie gives a powerful performance as Alex, the leader of the youth gang, the Droogs.  The other nine male cast members, playing multiple roles with sharply etched characterisations, demonstrate ensemble playing at its best.  As well as being good actors, this cast also demonstrate strong dance ability, handling very demanding choreography throughout the show.

The director, Alexandra Spencer-Jones, presents a clear concept for the show.  It’s dark, threatening, at times confronting and unpleasant, but with occasional flashes of humour – all necessary for the subject matter.  In addition to the required Beethoven pieces, her choice of popular music worked well.  Her choreography is a highlight of the show.  The atmospheric lighting, designed by James Baggaley, added an important dimension to the production.

How well you know the story from either the novella or the film may impact on your ability to follow some moments in this play, especially as the gang members speak using a futuristic Anglo-Russian slang, Nadzat, at times.  There is no denying, however, that ‘A Clockwork Orange’ is powerful, exciting and memorable theatre.
Posted by Canberra Critics Circle at 11:22 AM