Written by Nick Dear
Directed by Mark Kilmurry
Ensemble Theatre production at The Street Theatre
May 7 -11, 2013 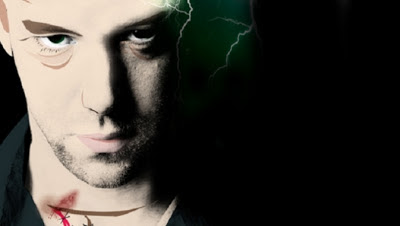 ‘No man is a monster’, cries the creature at the centre of Nick Dear’s re-imagining of Mary Shelley’s classic story, ‘Frankenstein’.  He’s wrong of course.  Despite being an intelligent creature in this version, his outward appearance still shocks and frightens those he comes into contact with.  The way we treat the creature makes us the monster.

Mary Shelley’s ‘Frankenstein’ must be one of the most well-known stories ever written - maybe not from the novel itself, which is a fascinating read, by the way - but from the numerous film versions made of the tale since cinema began.  Nick Dear’s play commences with the ‘birth’ of the creature, correctly assuming we all know how he was pieced together and brought to life by Dr. Frankenstein.

In a towering performance, Lee Jones is genuinely frightening and confronting in his physical depiction of a manufactured but imperfect human being.  With arms and legs flailing, horrific facial contortions and unnerving vocals, the actor commands both fear and pity in the audience.  Escaping from the laboratory, the creature is taken in by a kindly blind man and educated over a three year period.  What emerges is a still physically imperfect but highly intelligent person with a thirst for knowledge and understanding.  The problem is that people of the time are unable to see anything but the frightening physical appearance of the creature and continue to treat him as if he was an animal.

Nick Dear’s play was a huge hit for the National Theatre in London in 2011.  Taking incidents from the original novel and also from the famous films and embellishing them with his own ideas, Nick Dear has created an exciting and thought-provoking play.  Although played in period, this treatment of the story makes us question how we react to people with severe disabilities in our supposedly enlightened times.

The Ensemble Theatre production from Sydney creates an exciting evening of theatre.  On a spare but well-designed set by Simone Romaniuk and with atmospheric lighting by Nick Higgins, director Mark Kilmurry has produced an imaginatively staged and beautifully acted, thought-provoking and entertaining production.  His cast of eight, some playing multiple roles, give very sharp characterizations.

Sound is also an important aspect of this production.  A standout theatrical moment is the creation of the sound of a crackling open-air fire, which is provided simply but very effectively by two cast members in full view of the audience.  The live music score by Elena Kats-Chernin is played beautifully on a solo cello by Heather Stratfold and provides a soundscape that complements the onstage action perfectly.

Since I saw this production, I can’t stop thinking about it.  When that happens, I know I’ve seen a truly remarkable piece of theatre.