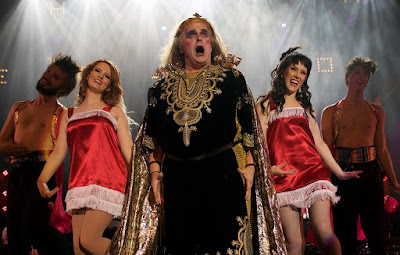 "Why don't I just stay here and ruin your ambition?"  So far, Judas has not acquitted himself well as a disciple.  He is highly strung, terrified of reprisals from the Romans, and while he loves his mentor (in a crazy stalker way) doesn't seem to agree with many of his teachings.  In short, Judas is an accident waiting to happen to someone, and it's hard to understand why Jesus keeps him around.  To top it off, Judas has recently agreed to betray Jesus to the authorities for a respectable finder's fee.  But in their final encounter, the wounded Judas makes one desperate threat: to just walk away and leave Jesus alone.  He senses that he is just an instrument in an elaborate suicide.  Jesus needs a Judas to betray him, and leaving Jesus alive might be a more vicious cruelty.

It's by no means pro-Judas, but the musical by Andrew Lloyd Webber and Tim Rice is interested in exploring Jesus' fatalism.  If you're the son of God and fated to die to save everyone, are the people who help you along that path really to blame?  Judas and Pilate are both very aware that Jesus is trying to die, and Pilate in his particular tries to stop Jesus' suicide by mob.  At the end, when Jesus is in his last moments on the cross, there is a sense that if he was not responsible for this outcome, at least he did not take any reasonable steps to prevent it.

The show is pitched as an "arena spectacular" in the cavernous Australian Institute of Sport Arena, and in practice this means that the show tilts more towards rock concert and lightshow than work of theatre.  Fortunately it's an excellent rock concert with amazing singing from Luke Kennedy (Jesus) and Michael Falzon (Judas) as the two leads.  Kennedy is a passive, ethereal and oddly clean-cut Jesus while Falzon's Judas is kinetic and sinister, and in their scenes together Judas looks like a fly buzzing around a lamp.  Kennedy's showcase is his phenomenal rendition of Gethsemane, while Falzon reaches a similar height in his tortured death scene, where he gives a deliberately grotesque reprise of "I don't know how to love him."

Jenna Roberts as semi-reformed hooker Mary Magdalene takes her cue from the music and gives her character gentle spirituality.  Rather than a potential lover for Jesus, she is his missing mother figure, even sharing the same name.  Judas reads her a love rival and becomes ferociously jealous of how close she is to Jesus, but this misses the point: Jesus is looking for comfort, not romance.  There were moments in the dancing where Roberts showed a wild and passionate sensuality and while I wanted to see more of this aspect of the character, the focus on her maternal qualities told us more about her relationship with Jesus.

There were many other stand-outs in the local cast.  Max Gamble's Pilate is wise and sonorous (and just a tiny bit petty), so regal it was easy to confuse him with the far less majestic Herod.  In the final act of the play he is Jesus' judge and also his defender, heroically facing down the mob before finally yielding because Jesus will not be an advocate in his own cause.  Two cameo roles stood out, Gordon Nicholson's Herod and Will Huang's Simon Zealotes.  Both performers captivated the audience with their all-too-brief appearances.  Nicholson's Herod is fey and macabrely joyful, the fun the performer is having with his gaudy number shining through.  Huang's Simon is frenzied by religious ecstasy and has phenomenal charismatic energy (I wondered whether he would walk away with some of Jesus' followers and start a militant splinter group).  The only place where the performing faltered was with the Pharisees.  In the first act the Pharisees were genuinely struggling to hit the painfully high and low notes the score demanded, sometimes starting to run out of air mid-lyric.  However their voices warmed up by the second act and this may have just been opening night jitters.

Overall this was an excellent, thrilling concert.  Two huge orchestra pits planted in the middle of the stage limited the movements of the chorus, restricting the possibilities of the dancing.  However Jordan Kelly's choreography is lively with a spirit of fun that was also reflected in the bright and colourful costumes by Anna Senior.  However, the sense that this was a concert rather than a full theatrical performance was created by some very clunky transitions between songs as well as incredibly static staging for some of the songs.  Often it was as though the action was stopping for a song rather than the songs being part of the action of the play.  Additionally, the script assumes a lot of prior knowledge of Jesus' story, and there were moments where I was wondering about the information that was not supplied.  Why exactly did the crowd switch so suddenly from loving Jesus to hating him?  And why does Judas bother using the subtle signal of a kiss to betray Jesus when all of the other disciples are unconscious in a drunken stupor?  The kiss became private and personal, a hint at frustrated sexual desire.

Director Stephen Pike has made the music his priority and he delivers an excellent performance of Andrew Lloyd Webber's first great success.  Headliners Luke Kennedy and Michael Falzon are phenomenal and the local cast hold their own, showcasing the level of talent Canberra is developing.  Jesus Christ Superstar is nowhere near as controversial as it was when it first debuted, but there is still a lot to provoke thought and the music is still as powerful as ever.
Posted by Canberra Critics Circle at 11:31 AM