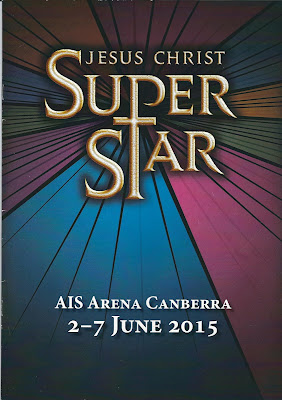 The big Pro-Am production of ‘Jesus Christ Superstar’ in Canberra’s AIS Arena is colourful and tuneful with some great performances from an enthusiastic cast.  There have been a number of productions of this perennial favourite in Canberra over the years but rarely do we have the opportunity to see it on such a vast scale.

Performances by the two professionals are excellent.  Luke Kennedy gives a nicely restrained performance as Jesus, singing clearly and confidently and with great warmth.  Michael Falzon as Judas has the more spectacular songs and he delivers them strongly, commanding the stage at all times.

Local performers also make their mark.  Jenna Roberts sings one of the best Mary Magdalenes you’ll ever hear and Max Gambale gave a beautifully sensitive rendition of ‘Pilate’s Dream’.  Will Huang was in fine voice as Simon, hitting high notes apparently effortlessly.  Nick Valois gave a nicely judged performance as the apostle, Peter.  His singing of ‘Could We Start Again, Please?’ with Jenna Roberts was one of the many highlights of the evening.  Gordon Nicholson brought the house down with ‘Herod’s Song’.

Musical Director, Ian McLean, and Vocal Coach, Sharon Tree, have obtained an excellent, clear sound from the big cast and orchestra.  Costumes by Anna Senior were nicely in period and stylishly fun where required.  Choreography by Jordan Kelly was also pleasing and entertaining in the comedy numbers.

Special mention must be made of the lighting design by Phil Goodwin.  It was spectacular and at times breath-taking.  The sound design by Chris Neal was also excellent with a good balance between orchestra and singers.  The set design by Brian Sudding and Phil Goodwin had lots of good playing areas and levels, giving the director the opportunity for constantly interesting staging of the show.

The only potential problem is the venue itself.  Avoid sitting high up in the Arena.  The action onstage is too remote to see much facial detail from there and there is a sound echo, making it difficult to hear the words of the songs.  It was also very cold up there.  We moved down to some empty seats at interval and it was a different show altogether.  This review reflects the experience of seeing the show from our post-interval position.
Posted by Canberra Critics Circle at 11:58 PM