AN AUDIENCE WITH MACHIAVELLI 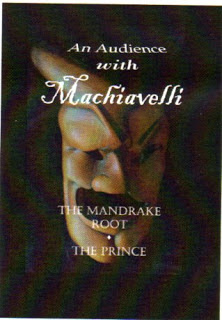 ‘An Audience With Machiavelli’ comprises two plays written by Rachel Hogan about the man and his work.

‘The Mandrake Root’ is a new modern day adaptation of Machiavelli’s 1512 farce, ‘La Mandragola’ that, according to the publicity, sets out to prove ‘We lie and cheat our way to happy endings’.  There’s good writing here and the updating to a modern era mostly works.  However, the direction of the play is uneven and the cast are not up to the demands of playing a farce.  Most of them are playing in a style more suitable to the 16th century which is at odds with the modern setting and dialogue.  Only Jess Waterhouse as the innocent wife seems comfortable and achieves a believable performance.

The second play, ‘The Prince’, finds Machiavelli in exile and battling depression.  At work on ‘The Prince’, he routinely locks himself in his study to converse with imaginary people in a court presided over by the Devil. His wife Marietta fears for his sanity and is compelled to confront the horrific background to what will be her husband's most misanthropic and abidingly controversial work.

This atmospheric two actor play in a period setting is well written and well directed.  Your reaction to it may depend on your level of knowledge of Machiavelli and his works.  There’s a lot to take in here in the intensely detailed and, at times, rapidly delivered dialogue.  The performances of both Peter Fock as Machiavelli and Nicola Tyndale-Biscoe as his wife are superb.

This review was first published in the Canberra City News digital edition 5 March.  Len Power's reviews can also be heard on Artsound FM 92.7 'Artcetera' program from 9.00am Saturdays.