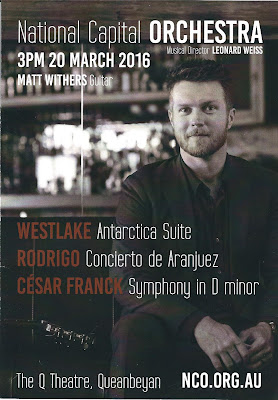 There was virtually a full house at the Q in Queanbeyan for the National Capital Orchestra’s first concert for 2016.  Musical director, Leonard Weiss, gave us three contrasting and entertaining works by Nigel Westlake, Joaquín Rodrigo and César Franck.  Guitarist, Matt Withers, played with the orchestra for the Westlake and Rodrigo works.

Leonard Weiss, the conductor, is an award-winning composer, conductor and performer and an ACT Finalist for Young Australian of the Year 2016.  Matt Withers is an internationally acclaimed classical guitar performer.

Nigel Westlake’s ‘Antarctica Suite’ for guitar and orchestra is derived from Westlake’s score for a 1991 Australian documentary of the same name.  It’s a very colourful work in four distinct sections evoking the atmosphere of Antarctica.  The opening section sets the scene of isolation and cold very well and the Penguin Ballet section is quite delightful.  Leonard Weiss and the orchestra achieved a high quality sound in this work and Matt Withers guitar playing was excellent.  The final section of the work was very well played.

The second presented work, Joaquín Rodrigo’s Concerto De Aranjuez, is a popular concert work from 1939.  Listening to it reminds you of music from Hollywood western movies at times.  It requires a highly skilled guitarist to play it with the orchestra and Matt Withers’ work here was breath-taking, especially in the most well-known second movement.  The orchestra captured the Spanish atmosphere of this work very nicely and there was especially fine playing from the woodwinds.

The final work, César Franck’s only Symphony in D Minor from 1888 is also a well loved concert piece.  It’s complex but accessible with various melodic themes appearing and re-appearing throughout the work.  The slow second movement was beautifully played but Leonard Weiss kept the best until last, thrilling us with a magnificently played grand final movement.

The National Capital Orchestra is drawn from the Canberra community.  Once again, it is clear how lucky we are to have so many talented musicians among us.

Len Power’s reviews can also be heard on Artsound FM 92.7 ‘Artcetera’ program on Saturdays from 9am.
Posted by Canberra Critics Circle at 9:05 AM