THE WHARF REVUE - THE PATRIOTIC RAG 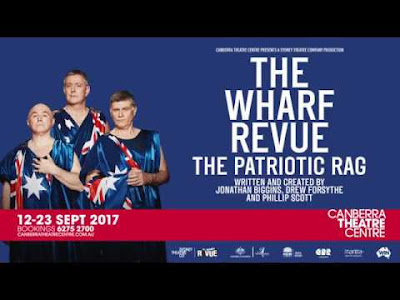 Topical revues used to be very popular in the theatre until television arrived.  Programs like ‘The Mavis Bramston Show’ in the 1960s and others killed the revue off in the theatre.  So why has ‘The Wharf Revue’ been able to notch up so many years of annual fun and consistently fill theatres?

The answer has to be the clever writing and performance skills of the creators Jonathan Biggins, Drew Forsythe and Phillip Scott.  This dream team have once again produced a very entertaining and
hilarious evening in the theatre.

Political personalities at home and abroad are targeted mercilessly but in a way that the people satirized would probably be laughing at how they’re portrayed just as much as the rest of us.  Well, most of them, anyway!  The satire is sharp, accurate and very Australian but it isn’t angry or nasty – we’re just meant to have a good time and we do.  Phillip Scott’s fine piano playing with clever arrangements adds a great deal to the success of the show.

Blazey Best joins the guys onstage this year and was a great addition to the team.  She gives a particularly devastating performance as Senator Jacqui Lambie and her fine singing of a Kander and Ebb song as German Chancellor, Angela Merkel, was a highlight of the production.

Everything in this show from the performances to the technical aspects displays a high level of professionalism.  The set, realised by Barry Searle, and the lighting, designed by Martin Kinnane, work very well together and the costumes by Scott Fisher and Paul Warren are clever and imaginative.  There's also excellent sound and video design by David Bergman. Wig stylist, Margaret Ashton, has done extraordinary work with the huge number of funny and accurate wigs worn by the cast.

Of course, you would be expecting that Donald Trump, Malcolm Turnbull, Tony Abbott, Pauline Hanson and company would get a serve, but there was also an affectionate tribute to the late actor, John Clarke, with Jonathan Biggins and Drew Forsythe in good performances as Clarke and Bryan Dawe.

As with all revue-type shows, some parts are better than others.  The sketches involving Senator Malcolm Roberts and Julie Bishop seemed a bit heavy-handed but, overall, it’s a delightful show once again with juicy satire and plenty of laughs.

Len Power’s reviews are also broadcast on Artsound FM 92.7’s new ‘On Stage’ program (hosted by Len) on Mondays from 3.30pm and on ‘Artcetera’ from 9.00am on Saturdays.