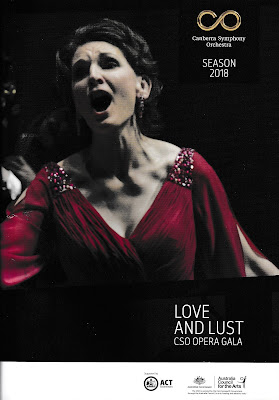 The concert, titled ‘Love and Lust’ included romantic arias by Verdi, Puccini, Massenet, Delibes, Cilea and both Johann and Richard Strauss.  The soloists all displayed impressive voices and technique as well as thoughtful and believable presentation.

The Canberra Symphony Orchestra under the baton of conductor, Simon Kenway, accompanied the singers extremely well.  They opened the concert with an exquisite performance of Verdi’s ‘Prelude Act One’ from ‘La Traviata’ and gave a notably exciting and dramatic performance of ‘Polonaise’ from Tchaikovsky’s ‘Eugene Onegin’ at the start of the second half.

The Pacific Opera’s Ensemble of singers displayed their fine voices in their accompaniment to several of the arias and particularly in Johann Strauss’s ‘Champagne Trio’ from ‘Die Fledermaus’ and ‘Brindisi’ from Verdi’s ‘La Traviata’ that brought this delightful concert to a close.

This review was first published in the Canberra City News digital edition of 10 June.

Len Power’s reviews are also broadcast on his ‘On Stage’ performing arts radio program on Mondays and Wednesdays from 3.30pm on Artsound FM 92.7.
Posted by Canberra Critics Circle at 9:18 AM