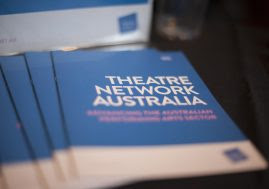 Young People and The Arts: The child as cultural citizen.

Theatre Network Australia, based in Melbourne, held the original forum to launch Sue Giles’ Paper at the Coopers Malthouse on February 2, 2018.  That success was emulated in Sydney, bringing together a wide range of people from theatre practitioners to venue administrators, with a particular concern for young people’s theatre.

For those unaware of the Network’s role: “Theatre Network Australia (TNA) is the leading industry development organisation for the performing arts, prioritising independent artists and small to medium companies.

Based in Melbourne, Australia, TNA works nationally and has a dedicated Victorian program. We run professional development forums, including the biennial Australian Theatre Forum, workshops on current issues for the sector including sustainability, touring, diversity in theatre, Indigenous theatre, women in theatre and interconnections, and we provide information and resources through our popular e-news and the online resource library.”

Then there is the Theatre Network NSW (TNN) [which] “is the peak agency for theatre in NSW. ... All the latest theatre news from around NSW and goings-on in the network.”

Additionally many attending in Sydney are active in ASSITEJ (International Association of Theatre for Children and Young People) which “unites theatres, organisations and individuals throughout the world who make theatre for children and young people. ASSITEJ is dedicated to the artistic, cultural and educational rights of children and young people across the globe and advocates on behalf of all children regardless of nationality, cultural identity, ability, gender, sexual orientation, ethnicity, or religion. ASSITEJ brings people together so that they can share knowledge and practice within the field of theatre for children and young people in order to deepen understandings, develop practice, create new opportunities and strengthen the global sector. The members of Assitej are National centers, Professional Networks, and individuals from around 100 countries across the world.”

In other words, my role on this occasion was to respectfully watch, listen and learn.

You might have thought that, with themes like “the child as cultural citizen” and “whose theatre is it anyway?”, the talk would be perhaps pseudo-philosophical or aggressively political.  I could have spouted in that manner endlessly, but held my tongue as people spoke, many more than those mentioned above, with stories of practical experience.  From these stories, the issues which had been flagged in Sue Giles’ Paper became manifest. [See Canberra Critics’ Circle and Frank McKone  March 20, 2018 at www.ccc-canberracriticscircle.blogspot.com and www.frankmckone2.blogspot.com.au ]

Time and again, young speakers proved the essential point that they are ‘cultural citizens’, as innovative designers and managers of successful theatre programs.  The young woman organiser of the Bankstown Poetry Slam, Sara Mansour, was particularly impressive for her determination to change her local culture and the conventional assumptions made by others about that part of Sydney.

At the other end of the age range, Stefo Nantsou’s story of Zeal Theatre and his refusal to be bound by the conventions of government funding over many decades provided a fascinating take on the politics of theatre.  Rather than following the conservative line of liberalism (no taxation and plenty of unregulated commercial profiteering), his form of what I might call Artistic Marxism equally rejects government control alongside anti-commercialism.  “Zeal Theatre is an internationally renowned touring theatre company dedicated to creating plays for schools, theatres and festivals. Founded in 1989 by actor / writer / director Stefo Nantsou, Zeal has created over 45 original productions and has performed throughout Australia, Europe, North America, Asia, New Zealand & South Africa, with their plays being staged in over 30 countries worldwide.”

Somewhere in the middle is the work of Sarah Parsons at Outback Theatre for Young People which “engages with young people from regional and remote communities to make distinctive contemporary theatre through collaborative processes, dedicated to creating innovative, participant-owned youth theatre. We engage young people, aged 4 to 26 years, from throughout the Riverina region of NSW and Northern Victoria, in collaborative, generative theatre projects that celebrate their lives and their aspirations. OTYP works with an Artistic Directorate model where a small group of Artistic Directors work across our region, supported by a Creative Producer. Each project is designed for and shaped by the participants, with two stages over two years in order to develop sustainable arts practice in our communities.”

Yet, she told us, none of the high schools in this vast region, which stretches up to Broken Hill, has a drama teacher.  Nor a theatre.  But no matter – any space, even after many hours’ travelling from place to place, will be turned into an “Empty Space” à la Peter Brook.  Hers was a brave and daunting story.

Even within the industry there were questions about the extent of support, not only for theatre for children and young people but more especially by them. Amy Matthews gave a spirited defence on behalf of Parramatta’s Riverside Theatres programming, going beyond assumptions of other times and places about participation by children and young people.

So where I had at first considered Platform Paper 54 as too much focussed on advocacy, I now understand that the key issue is recognition of and proper support for children and young people as the cultural citizens they already are.  Where the Paper was subtitled An Agenda for Change it did not just mean we should be doing theatre ‘with, for and by’ young people, but that this well-established branch of arts industry should be better understood, including by the powers that be who make political and funding decisions.

I see this Industry Forum as an essential step, to articulate clearly within the industry an agreed understanding of what Young Peoples’ Theatre consists of, and what distinguishes it from other kinds of theatre.  The panel discussion and Q&A session were, I think, very successful.

Now I see the need for Theatre Network Australia to take determined and long-term action to develop understanding in the general community to underpin campaigning for improved and continuing funding.  The case of Outback Theatre for Young People seems to me to be an excellent model to start the ball rolling.