I LIKED IT but I didn't know what the f#!k it was about. 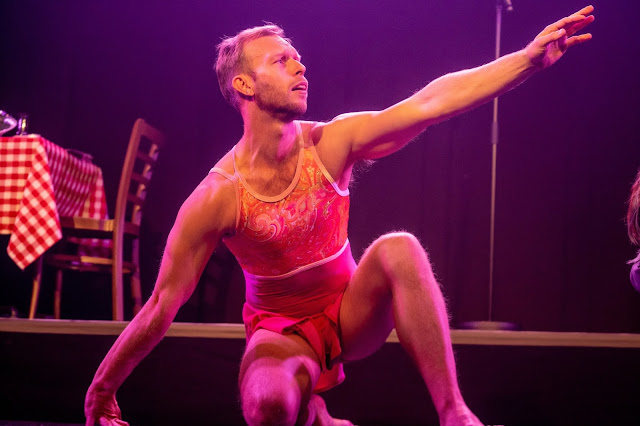 Devised and performed by JOEL BRAY

Joel Bray is a successful dancer, writer and performance-maker who trained at NAISDA and WAAPA. He pursued a career in Europe dancing in a succession of overseas dance companies before returning to Australia to work with Chunky Move.

For this awkwardly named show, promoted as being modelled on the successful Politics in the Pub and Science in the Pub presentations, his stated aim was to attempt to demystify contemporary dance through conversation, silly stories, music and dance.

The opening night performance attracted a large contingent of Canberra’s dance cognoscenti, attracted by Bray’s reputation as an inventive dance-maker, as well as others perhaps more interested in the promise of a free drink on arrival and a house band.

While politics and science are both verbal pursuits, dance is very much a visual medium, and consequently people who visit pubs and bars rarely do so to discuss contemporary dance. As it turned out, the performance contained no discussion and very little that would attract the unconverted to contemporary dance.

It does contain some impressive contemporary dance elements however, but these were seriously compromised by the decision to present them in an unsuitable environment.

In keeping with the concept, the Courtyard studio was transformed into a cosy pub. The walls were decorated with sporting memorabilia, with the audience seated at cabaret tables facing the performance area, with a well-stocked bar set up behind them.

A narrow raised platform stretched across the back wall facing the audience with a cleared area in front where most of the dancing took place. At one end of the platform, positioned in relative gloom, was “the house band”, which turned out to be accomplished local singer/composer/musician, Jess Green, who contributed a charming solo, and accompanied the performance with atmospheric synth music, sometimes appearing to surprise Bray with her choices.

Exhibited at the other end of the platform were a vegetarian meat tray and a bottle of wine, which it turned out were the prizes for a series of audience participation party games which formed the main substance of the performance.

Prior to the performance Bray, costumed in a sequined black jacket, set up an informal atmosphere by circulating between the tables and trading quips with audience members.

As the performance began, he then introduced himself and his associate artist, Jess Green, and after a few welcoming remarks, removed his black jacket to perform the first of two outstanding highlights of the show.

The first, a clever three-minute dance/ lecture in which he outlined the history of contemporary dance while demonstrating the signature moves of the famous choreographers who contributed to that history.

The second highlight was a fascinating demonstration of his approach to choreography, following which, in full view of the audience, he changed into a matelot costume, donned white make-up and performed  a beautifully executed solo utilising the choreography he had just demonstrated.

However the problem was that as with most contemporary dance both these solos contained a great deal of complex floor work, most of which regrettably was lost to all but those fortunate few occupying the front tables.

These two highlights were positioned between a series of time-wasting audience participation segments which seemed to be hugely enjoyed by those willing to embarrass themselves for the edification of boisterous friends and the glory of winning the meat-tray and a bottle of wine.

Much of the program looked surprisingly under-rehearsed. In fact it often appeared that Bray and his associate artist had had little time to communicate, given that he interrupted his performance several times to compliment her on her choice of accompanying music, suggesting that he had not heard it before.

It was an excellent idea to create a cabaret questioning the tropes of contemporary dance, and it is obvious from some segments of this program that Bray has the wit and skills necessary to create something very special in this regard.  “I Liked It but I didn’t know what the f#!k it was about” is not that show. .

Hopefully Bray will hold on to the successful elements, create other segments to match them, discard the rubbish, and create for himself and his audience, a showcase worthy of his talents.