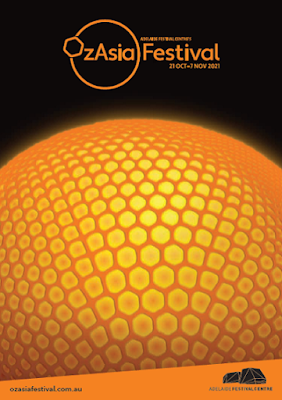 At first glance the picture on the cover of the 2021 OzAsia Festival Program may appear to be a large orange covered in scales or perhaps a beehive. “It’s meant to be intriguing” festival director, Annette Shun Wah tells me. It is in fact a hugely magnified eye of a dragonfly. The scale-like hexagons are a multiplicity of lenses that make up the dragonfly’s eye. “A dragonfly in a lot of different cultures symbolizes transformation, Shun Wah explains, “and that is perfect for this festival and the lenses of the eye symbolize multiple perspectives for looking deeper at everything and every angle.” From October 21 to November 7, Shun Wah hopes to open new eyes and the dragon fly represents the festival’s totem.

As the first Asian Australian to direct the thirteen year old festival, Shun Wah looks deeper into the role that OzAsia can play in our nation’s artistic landscape.” We’re trying to take it back to the original idea of OzAsia, focusing on Australia and Asia. OzAsia became a showcase for spectacle but for me to take this on I wanted it to have more meaning and more impact in Australia.” A glimpse at her diverse and forward looking program reveals a desire to make the festival more accessible and inclusive. The crowds that have flocked to the traditional Moon Lantern Parade and the Lucky Dumpling Market each festival are not necessarily venturing inside the theatres to witness the unique and  outstanding performances. “I’d like to change things”, Shun Wah says “and the result is a more pertinent and contemporary festival. I’m really quite proud that the festival has a lot of work that one might think of as experimental. And yet it is all very accessible. You don’t have to read reams of information to get something meaningful from the pieces

One such community event is the Pinoy Street Party connecting with Filipino communities across the city, Adelaide born music producer DJ Kuya James mixes old and new school songs from the Philippines to bring the generations together in a feel good party. Another feel good initiative is the Special Comedy Comedy Special which will be held for one night only in Her Majesty’s Theatre and is certain to attract a different audience. Laughter opens the way to understanding others and discovering things about them. Food is another popular pathway to greater appreciation of other cultures. The festival offers a variety of food related projects including Double Delicious . Five stellar story-teller cooks reveal the secrets of dishes relevant to their lives. Directed by Valerie Berry Double Delicious features writer Benjamin Law, dancer Raghav Handa, Kimchi master Heather Jeong, and cherished national treasure Elizabeth Chong.. This immersive work with stunning visuals and music explores family, learning, loss resilience and legacy. Audiences will get to eat the dishes that inspire the stories. “Sometimes it’s done reverentially. It’s extraordinary.” Shun Wah says

Indigenous culture is not directly part of the connection between Australia and Asia but indigenous artists will participate in the Australian Art Orchestra’s Hand To Earth. Yolngu songman Daniel Wilfred from Arnhem Land will collaborate with Sunny Kim, one of Korea’s foremost jazz vocalists. Trumpeter/composer Peter Knight, Yidaki player David Yipininy Wilfred and Aviva Endean on clarinet will provide the backing. It is a reflection of the past and a shared culture. “It makes the hair stand on end. It’s beautiful.”

Shun Wah is eager to tell me about another World Premiere that crosses culture and faith. Michael Mohammed Ahmad is an Arab Australian Muslim writer whose work The Demon Is part crime thriller, part surreal magic realism in which a Chinese -Australian street fighter invites an Aboriginal Muslim and an Arab-Australian Jihad to travel to the site of the nineteenth century Lambing Flat riots against the Chinese goldminers. Does a curse inhabit the landscape and what are the demons that they are forced to confront?

Another work that focuses on Chinese history will be renowned Australian choreographer Sue Healey’s The Long Walk. This will be live streamed from Robe in South Australia’s South East for three performances only.

It is impossible to ignore the enormous and devastating impact that Covid19 has had on the arts. At the same time, after being forced at her first festival as artistic director last year to resort purely to a live streamed program Shun Wah has gone all out to create a festival that is stamped with her vibrant vision. “I took this job on because I’ve always thought that the Asian Australian content was the missing link. It’s really easy to say ’Look there’s all this great work here, more than enough for our programme and of very high quality.” It has never been in one place like this before. A lot of the works are world premieres such as Alison Currie and Yui Kawaguchi’s dance work Somewhere, Everywhere, Nowhere, Maria Tran’s ACTION STAR, Indonesian Shadow play Perahu-Perahu, Sue Healey’s The Long Walk, and Chinese Australian musician and filmmaker Mindy Meng Wang’s When.  Mindy Meng Wang ‘s emotional showcase presents family stories from her hometown of  Lanzhou as well as Wuhan, Shanghai and Melbourne, all of which have been affected by the impact of the Covid outbreaks.. In addition to the world premieres, there will be several Adelaide premieres including Ahimsa’s Meditations on Gandhi, performance artist Justin Placido Shoulder’s Aeon+:Titan Arum, Kathak dancer Raghav Handa’s TWO with tabla musician Maharshi Raval. Anchuli Felicia King’s “blisteringly funny satire” White Pearl could not be performed as programmed last year and the Sydney Theatre Company and Riverside’s National Theatre of Paramatta’s production will have its Adelaide premiere at this year’s OzASia. .Another fresh initiative will be In Other Words, a writer’s festival curated by Laura Kroetsch and featuring writers from a wide range of cultures, who will discuss themes that have emerged through the programme from suburbia as well as remote regions of the country.

Covid has also impacted on the two major community events. The Moon Lantern Parade will return as The Moon Lantern Trail in a re-imagined form. This year the audiences will go to the lanterns, placed along a trail and accompanied by performances at various stages of the trail. This will be a Covid-safe experience but Shun Wah also assures me that it will be a more satisfying and immersive event. The hugely popular Lucky Dumpling Market will now be located in Elder Park along the bank of the River Torrens. Last year the vendors learnt how to cope with Covid safe measures and restrictions and the park will allow greater, safer access to the dumpling stalls.

Shun Wah has programmed a festival that tells all our stories. It looks through the lens of Asian Australians at the lives of all Australians.  “It’s a look at how contemporary people express themselves through their art. I want the festival to have something meaningful to say about who we are right now. And what we’re feeling right now. I felt we also had to be sensitive to what we are going through with the pandemic. I didn’t want to programme anything that was going to be incredibly harrowing. I wanted this to be a festival that was going to feel right in our emotional state. There’s stuff in there that’s provocative and it’s not all easy but there is nothing gratuitous about it.”

Shun Wah’s OzAsia is a multicultural banquet of succulent, tantalizing and illuminating tastes. It is also a celebration of Asian-Australian talent and community. I ask Shun Wah which week she would recommend for visitors from interstate. “You’ll just have to come for three weeks!” she replies. “What I would love this festival to be is for people to trust it enough to know that whatever they book, they’ll discover something they knew nothing about and that was different. I want that to be the kind of festival for my audience.”