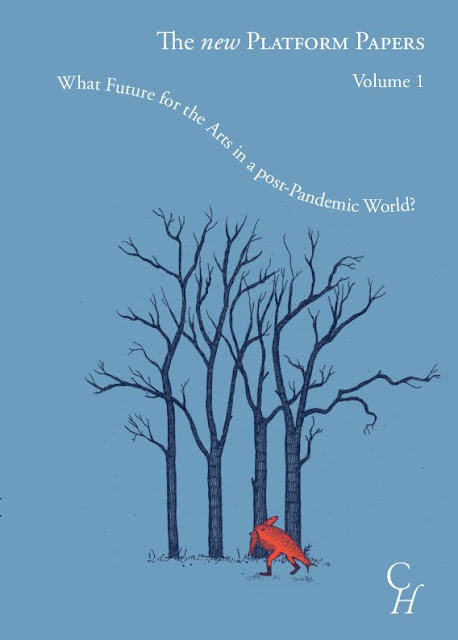 Katharine provides in her Christmas Greetings an outline of changes, especially in the status of women, that have taken place over the two decades of her leadership in setting up Currency House, following her stepping down as publisher of Currency Press.

Rather than each Platform Paper being an essay by a single expert contributor, this New Platform Paper contains five papers, with additional material:

No 1. Imagination, the Arts and Economics
Introduction: A Snail May Put His Horns Out, Harriet Parsons
Models, Uncertainty and Imagination in Economics, Richard Bronk
What’s Wrong with Cannibalism? Jonathan Biggins and John Quiggin
You Can Sing (Averagely)! Astrid Jorgensen
Afterword: Looking Back and Looking Forwards, Ian Maxwell

Rather than offer a summary of the complex arguments and practical experiences presented by such a variety show of commentators, here is a selection of quotes which hopefully will stir your social, political and artistic interests and knowledge.

The first issue of the New Platform Papers published in this volume arose out of an event which will be central to the series from now on, an annual Authors’ Convention. The Convention itself was the initiative of my colleague, the new Director of Currency House and Katharine’s daughter, Harriet Parsons. A brilliant addition to our activities, the Convention is a two-day public gathering where we invite the authors of Platform Papers to come together to reflect on a given theme.

Harriet Parsons (Wurundjeri country)
Introduction: A Snail May Put His Horns Out

We have to decide what changes we are willing to make if we are to plan a route, not just out of the pandemic, but off the dangerous course we have been following for the past forty years. The arts may seem an unlikely point man for this operation. We have become more like a snail than a butterfly, withdrawn inside the protection of its shell, but as the eighteenth-century radical Thomas Spence once wrote, ‘a snail may put his horns out’.

This first volume of the New Platform Papers is devoted to exploring how our imaginations became captives of the ‘dismal science’, and the role the arts can play in leading the way out.

The coordination properties of models and their associated narratives—their tendency when internalised to frame expectations and influence behaviour and outcomes—makes them an instrument of corporate or government power. And this power may—initially at least—be in inverse proportion to the degree of humility with which the narrative or model is promulgated.

The poet, Percy Bysshe Shelley, underlined the role of imagination in sympathy and therefore morality in his Defence of Poetry:
A man, to be greatly good, must imagine intensely and comprehensively; he must put himself in the place of another and of many others; the pains and pleasures of his species must become his own. The great instrument of the moral good is the imagination—and poetry administers to the effect by acting upon the cause.

Such sympathetic identification with the plight of others is often seen as the quintessential opposite of the narrow self-interest of homo economicus.
…we all have no choice but to imagine the future, interpret the creative interpretations that others place on their predicaments, and invent new ways of making sense of our own.

Jonathan Swift’s essay A Modest Proposal was prompted by the British national debt crisis of 1729. Having offered conventional solutions in a number of essays, he turned to satire in frustration, proposing that landlords eat the children of their poor tenants:
I grant this food will be somewhat dear, and therefore very proper for landlords, who, as they have already devoured most of the parents, seem to have the best title to the children …

Swift’s A Modest Proposal seems, yes, a ludicrous idea, but then look at Airbnb, where you monetise your family home. The home was the sacred hearth of the family. But then someone came up with the idea of selling part of it to strangers on a nightly basis. We recently toured to Orange in regional New South Wales. It has 364 Airbnbs, but no-one can rent a house there.

At an artistic level, much of our cultural policy is now being dictated by social media platforms, and artists are increasingly self-censoring. We were recently told not to portray non-Caucasian characters in the Wharf Revue. We were portraying Xi Jinping and Kim Jong-un, two of the most powerful people in the world. I find it extraordinary that satirists are now being told who they can and can’t offend. I would have thought the point was to offend everybody.

Harriet Parsons asks:  So is the universal basic income the answer for the arts?
JQ:  I’m certainly a proponent of a version of the universal basic income, which is the level of income guarantee, which would include a basic living standard for artists engaged in creative work. It differs in the sense that you don’t give it to Gina Rinehart and try to extract it back through taxes, you only expand the provision of basic incomes. But that would provide a basic income to anybody who wanted to apply themselves to creative work. That is something we could and should do.

Astrid Jorgensen (Turrbal and Jagera country)
You Can Sing (Averagely)!

I could not wrap my head around the fact that teenagers were spending every second of their lives consumed by music while simultaneously proclaiming to hate Music, the subject. They would walk into the classroom with their favourite singer blasting in their headphones, then take the headphones out, slump in their chair and despise singing with me for 50 minutes. I started to worry that I was ruining music-making for children, which was a heavy burden to bear.

[Astrid left school teaching to set up the well-known Pub Choir, which in the pandemic lockdowns became Couch Choir online, attracting participants from all over the world.]

But there was one thing still bothering me. None of these choirs reflected me in any way. Each of my seven choirs were either made up of kids forced to sing by their parents, or were mostly white, semi-retirees. There is nothing unpleasant about working with either group. But as a 20-something Asian woman myself, it was confusing to me that none of my peers wanted to sing.

So in 2017, after years of friends declining to sing with me, I wrote a list. On it, I put every excuse I’d ever heard about what stopped somebody from joining a choir:
Auditions
Time commitment
Having to compete/perform
Reading sheet music
Unfamiliar repertoire
General choir lameness
Having a bad singing voice.

I determined to solve all of these roadblocks. Thus, Pub Choir was born.
Not always in a pub, the trademarked name, Pub Choir, describes my musical act. It’s a ticketed show during which I transform an audience—any audience—into a functional choir.

I believe that Pub Choir gives people the opportunity to embrace and value mediocrity and truly, madly, deeply embrace their averageness. There is a freedom in a crowd where you are genuinely unimportant. Nobody believes that they have become a better singer at Pub Choir. They just feel less afraid to share whatever horrible voice they have. If one person forgets what to sing, someone nearby will remember. Some people sing flat, some sing sharp, some sing too early, some too late and the overall effect is a rich, full, electrifying average. Our audiences reclaim music-making back into their lives, realising that singing belonged to them all along.

The diversity within Couch Choir participants was remarkable. In one song we had 5,000 participants from 45 countries. We received submissions from places we had never considered visiting, like Kazakhstan and Norway. People sent videos from their farms, their wheelchairs, from houseboats, using sign language. They were younger, older, more colourful. Couch Choir was the distillation of what I had always hoped Pub Choir would be: regular, diverse people feeling personally empowered to contribute to the whole.

Sure, it’s not peer-reviewed research, it’s just 613 people who chose to participate. But when 100 per cent of them self-report that their mental health is improved by joining in, it’s worth taking note. Singing—even online—made them feel happier, more connected and more hopeful. And they thought it was an experience worth fighting for. Art has always been more than just entertainment or a distraction. Art can heal us.

Exhaustion, then, is integral to the [arts] field at the best of times. In the context of the acute crisis of the current Covid-19 epidemic, the arts eat their young…. [leading to] three questions, which were put to the Convention for further discussion. Four key themes emerged. First, the proposition that art and culture are fundamental to the sustainability of society; second, that those engaged in the fields of art and culture do not have the capital to support them; third, that the arts are exhausted; and fourth, that its professionals have been pitted against each other in the competition for resources, with the result that the sector has become fragmented and unable to advocate for its interests as a whole.

Ambiguity is the strength of art, as well as its weakness. Historically—indeed from Plato onwards—the protean, make-believe, liminal nature of theatre—and the recent genres that take up the even more equivocal trope of ‘performance’—has generated profound anxiety and moral panics.

Our challenge is to resist reprising old arguments that belong to the past, and instead peer through the lens of new experiences with the eye of imagination. That, I hope, is the project Currency House has set before us, and towards which the inaugural Convention of 2021 has made the critical first step.