SCHOOL OF ROCK THE MUSICAL 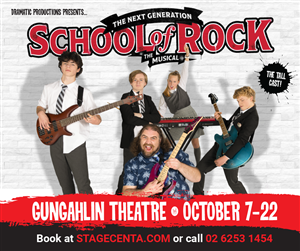 School of Rock THE MUSICAL.


Dramatic Production’s latest Musical Theatre offering rocks!! As productions go School of Rock THE MUSICAL is off the charts. This is largely due to the extraordinary talents of Julian Fellowes (Downton Abbey) who has written the book, lyricist Glen Slater and composer Andrew Lloyd-Webber. It is also due in very large part to an outstanding team of cast and creatives who blew audIences away and brought a full house to a spontaneous standing ovation. Managing director Richard Block has taken a bold initiative in casting two casts in principal roles , the SMALL CAST and the TALL CAST. On the night I went the TALL CAST was performing, while the SMALL CAST members took other roles.

The plot is simple enough. Dewey Finn (Max Gambale) has been thrown out of a band. His flatmate and former band member Ned (Bradley McDowell) and Ned’s harpie girlfriend Patti (Courtney Hayden) are demanding rent. Drastic times call for drastic measures and Dewey intercepts a job offer for Ned from the prestigious Horace Green School for privileged students. Posing as Ned, Finn discovers that his uptight class are musically talented and devises a plan to coach them in rock and enter them in the Battle of the Bands. It’s a plan fraught with danger. Not only does he have to face the scrutiny of the principal, Miss Mullins (Taylor Paliaga) but also other staff members and the parents of the children. And all this while trying not to be discovered as he carries out his unorthodox ambition.  It’s a scenario that Dramatic Productions’ company Take it to the Man in a show that explodes with Lloyd-Webber’s guitar twanging, drum crashing and keyboard thumping score under  Kat Tang’s assured musical direction, accompanied by a spirited seven piece orchestra.

Director Marty King doesn’t miss a beat, staging a fast flowing, high octane show that captures the feisty mood of pumped up rock, the sombre moment of  Finn’s plight, the sweet sentiment of Miss Mullins’s awakening and the fiery accusation of indignant parents. King is well supported by Nathan Rutup’s  imaginatively inventive choreography and Tan’s insightful musical direction of Lloy’d Webber’s easily recognizable and catchy score. Audience’s familiar with Lloyd-Webber’s canon will recognize elemens of his other popular songs. This is not a criticism but an observation that recognizes Lloyd-Webber’s  talent for turning out a popular tune. Dewey’s solo When I climb to the top of Mount Rock is a case in point.

Central to the success of this production are the performances by Gambale, the amazing performances by the phenomenally talented young performers and the wonderfully realized characterization of the principal Miss Mullins by Paliaga. Gambale, a seasoned veteran of Musical Theatre in Canberra, is a giant of a presence on the Gungahlin Theatre stage. His command of the songs and his powerful dramatic performance are pivotal to the success of School of Rock. He emanates an energy and charisma that galvanizes excellent performances from his talented fellow artists. Taliaga’s captivating vocal range from opera to pop and her embodiment of the prim and proper head-mistress  harbouring suppressed creative talent is played to perfection.

Hollywood film comedian of the Thirties once said “Never act with children or animals.” Maybe it was because of his fear of being outshone by their energy, ebullience and truthful performances. King’s casting of every performer in this production is inspired, but none more so than the casting and direction of young performers whose joyous and authentic performances bring the house down. Each and every one sings, acts, dances and plays like a professional. Keep your eyes out for these remarkable performers. They are the brightly shining future of musical theatre on the amateur or professional stage. I kept being reminded of Tim Minchin’s Matilda the Musical with these performers as the children and Gambale as the intimidating Miss Trunchball. Maybe another year!

It would be remiss of me, as a former drama teacher, to simply comment on the wonderful direction, music, choreography, performances and set, costumes and lighting of Dramatic Productions' triumphant staging of School of Rock The Musical. The show is a lesson in pedagogy, a plea to unleash the inherent creative talent and to embrace individuality and true potential. The shackles of convention are cast aside by Dewey’s recognition of the spark that ignites the passion and the power of the creative spirit. We see conformity and expectation challenged and eventually overcome as a result of Dewey’s ignorance of conventional teaching methodology. School of Rock The Musical may offer an idealistic version of transformation by Dewey’s creative force and honesty but it is the inspiration for a production that is sure to bring audiences to their feet in rapturous applause at every performance. This is a musical theatre production not to be missed.