Produced by David Atfield and The Street Theatre 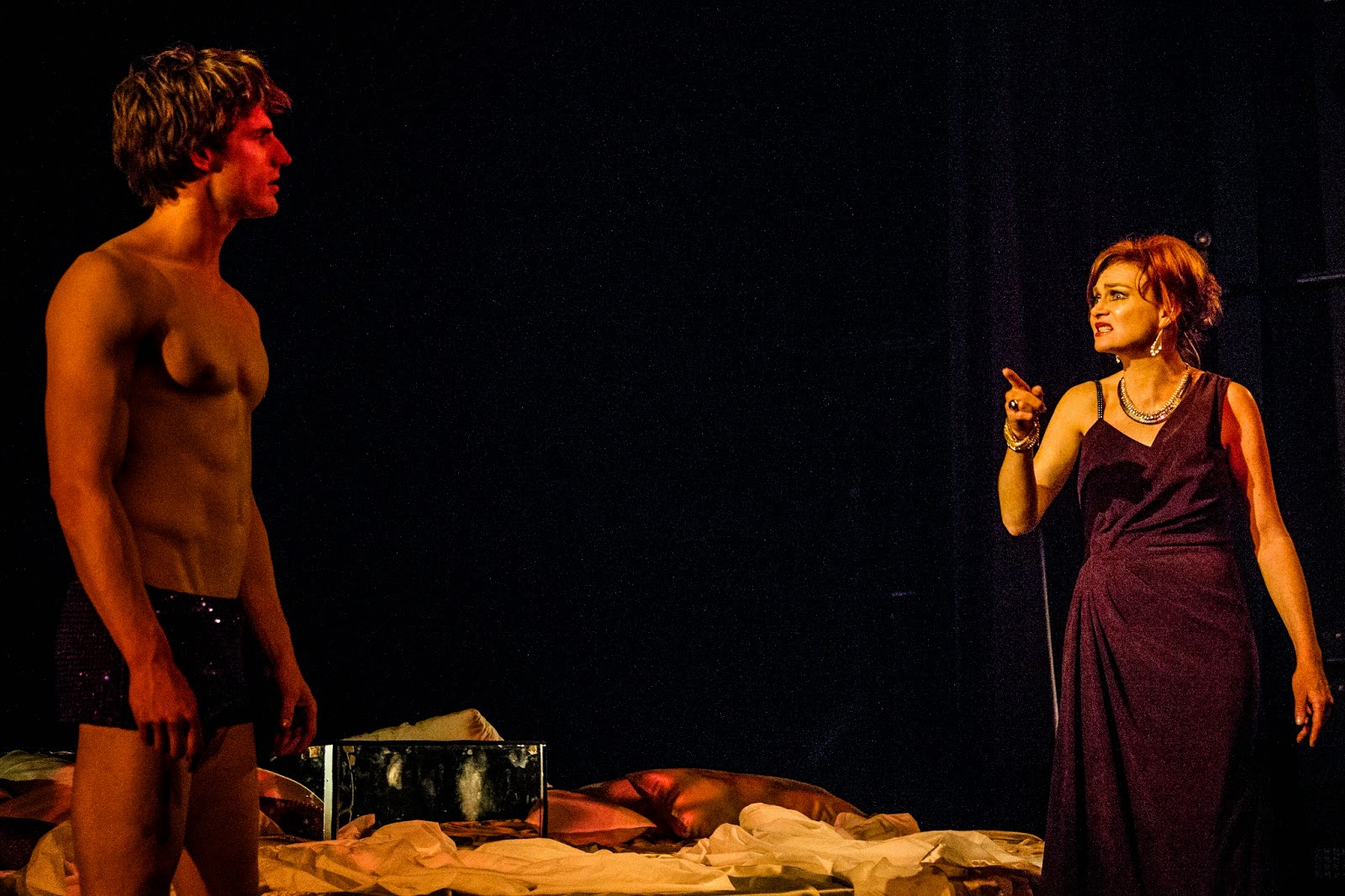 On a trip through a museum of classical art, a statue of a strikingly beautiful Greek youth comes to life and directly addresses us.  Hopping down from its plinth, it draws attention to its identity: this is Antinous, gay lover of Roman Emperor Hadrian.  Now that he has our attention he wants to tell us his story.  But first he chides us for noticing his penis - shaming us for being ashamed of nudity.  Writer/director David Atfield introduces us to the world that existed before Christian shame in "Scandalous Boy", giving a voice to a figure that has been ignored and denigrated for centuries because he is an inconvenient reminder of Hadrian's sexuality.  However as the play develops Antinous' story reveals a superficial and manipulative narcissist, and we begin to wonder whether physical beauty is as important as he insists.

The play deliberately avoids the speeches and togas approach to Roman life, showing us these characters acting (and dressing) the way they would if they were alive today.  Hadrian and Antinous don't meet at a Roman bath or similar picturesque period location, they hook up at a gay nightclub.  Hadrian is imagined as a bear - bearded, slightly overweight, sporting a leather jacket.  For the most part the story is allowed to run as if it was happening today, although occasionally Antinous has to stop the action and inform us of an important cultural difference - for example, that while these days top and bottom roles can be fluid, in the Roman period they depended on social dominance.  When Antinous tries to lure Hadrian into being on the bottom, he is both awakening him to a new form of pleasure and trying to cement his dominance over the Emperor.

However the play constantly veers away from its richest territory, the possibility that even if their relationship began as prostitution Antinous might grow to genuinely love Hadrian.  As Antinous starts to age (he reaches 19 - virtually decrepit) he becomes desperate to maintain his place, sure that the only thing he has to offer is physical beauty.  When Hadrian confronts this narcissism with genuine acceptance and love, we feel sure that Antinous' heart will be swayed and he will learn that there is more to life than just having a hot bod.  But it's not to be: Antinous informs us in direct address to the audience that he does not love Hadrian at all and is just using that love to gain power for himself.  From that point on, we have zero sympathy for this Adonis: he is only out for himself and utterly ruthless in his ambition of being named Hadrian's successor.  If he had demonstrated some humanity, we might feel sympathy for him.  Instead we are glad that this monster's ambitions are so helpless.  His death feels more like a final act of vengeful petulance than tragedy - if he can't have what he wants (which is everything), he will cripple the only person who truly loves him and glory in how magnificent their pain is.

Ethan Gibson's athletic performance as Antinous is shameless in both body and behaviour, keeping us fascinated even as our sympathy erodes.  He is cocky and confident, master of every situation - but with a fatal arrogance that we sense will unravel his ambitions.  Nicholas Eadie is gentle, sentimental and even a bit of a sook as the besotted Hadrian, torn between genuine love and the demands of power.  Raoul Craemer is watchful and hungry as Hadrian's discarded ex-lover, while James Hughes is believable as Antinous' secret love.  Emma Strand stands out as Hadrian's Empress, playing the same person at two periods of their life: the hopeful innocent who married an Emperor, and the sardonic Empress who has learned to make the most of a loveless marriage.  The cast have a lot of fun with the modern treatment of classical material and give the show a playful spirit that keeps it engaging.

I was strongly reminded of Evita: an ambitious but poor youth uses their sex-appeal to conquer the leader of a country and becomes the power behind the throne.  But while Evita was a capable political leader in her own right, Antinous bets everything on the domination of a single heart.  Antinous' ultimate fate feels just: after a few centuries of Godhood (deification by the grieving Hadrian) he falls into near-total obscurity.  The youth who thought physical beauty was everything exists only as an unrecognised marble statue, one of many anonymous Greek boys in museums across the world.  Meanwhile for his justice and humanity the slightly overweight Hadrian is remembered as one of the greatest Roman Emperors.  Maybe looks aren't that important after all?

"Scandalous Boy" is worth seeing for its frank depiction of sexual relationships and energetic storytelling, but audiences will have to make up their own mind about the value of physical beauty.  The show is pitched as an antidote to our modern ideas of shame and sin but only raises more questions.  I left the theatre a little glad to have a few wrinkles - better to accept yourself and your imperfections than, like Antinous (following the famous example of Narcissus), drown in your own reflection.
Posted by Canberra Critics Circle at 4:44 PM