Written and Directed by David Atfield

The Street Theatre in association with David Atfield

You need to see past the excessive exposure of male genitalia, the steamy, homo-erotic sex scenes or the prolific use of the expletive to fully appreciate the true fascination of David Atfield’s latest play, “Scandalous Boy”. You need also to grasp the grit and wit of Atfield’s contemporary resonance by bringing the 2nd century statue of Antinous, Emperor Hadrian’s teenage lover, to life in the 21st. century to reclaim his rightful place in history. Atfield is ingeniously Pygmalion to Galatea’s Antinous, and the device worls extraordinarily well, not least because of Ethan Gibson’s charismatic performance as the long-forgotten Antinous. More on that later.


Some audiences may delight in the more salacious and yet utterly appropriate aspects of the production. The salivating voyeur may revel in the fantasies, but that would be to deny the inherent truths that are reflected in the lives of Atfield’s characters, carefully drawn from the pages of history and garnished with the playwright’s ingenuity and the power of theatre to bring these characters to life again.


There is much more to Atfield’s riveting drama than a discourse on male sexuality and most specifically sexual lust and love between men , although this is at the centre of the relationships between Hadrian (Nicholas Edie), Antinous (Gibson) and Hadrian’s former lover and now loyal advisor,  Lucius (Raoul Craemer). It is further complicated by Antinous’s love for a Roman of his own age, Marcellus (James Hughes), who serves Hadrian’s cruelly discarded Empress. Sabina (Emma Strand). The tangled web of relationships is fascinatingly revealed by Antinous, who breaks through the fourth wall to draw his audience into his version of Antinous’s rise from Hadrian’s “eronomous” or “bum boy” to a God upon his premature death at 19 in the waters of the Nile. It is a familiar device, but Atfield and Gibson avoid the accusation of predictability through a script smattered with humour and wry cynicism and a performance so engaging that we succumb entirely to the captivating interest of Antinous’s story. Gibson grabs our attention from the first breath of the statue’s incarnation to the final account of his mysterious death. Whether naked or modestly clothed  in  a pair of briefs, we are unable to extricate ourselves from the magnetic hold of his performance. Atfield’s play is about beauty and the eye of the beholder. Gibson stands Adonis-like before us and Atfield presents us with a parade of beauty in his play, ethereal and God-like,   the physical ideal, the faded,the neglected and the  rejected.


Scandalous Boy tears at the facade that conceals the frailty of human nature: its impulse, its insecurity, its desperation to retain youth and beauty and in the case of Sabina cast aside on her weeding night, the powerful lust for revenge. It is the complexity of Atfield’s history and his characters that cloaks his mirror up to Nature with a deftly drawn portrait of the inherent condition of the human species, no matter what gender, what culture , what belief stystem or what time in history they have inhabited.


Scandalous Boy could not have succeeded without the cast to fulfil Atfield’s challenging demand, both as a playwright and as a director, whose passion and skill drive the drama of his play with a crystal clear vision. Most notably, Atfield triumphs with his casting of Gibson as Antinous and Edie as the rather rumpled Emperor, supremely powerful in his besuited office, and yet inflicted with emotional impotence when confronted by the vagaries of love. At times imperious and brutally-all powerful, Edie can reduce his Hadrian to a petulant child or a besotted victim of his natural desires. The clever, canny Bythinian object of his desires is also the supreme commander of the mighty emperor’s reason and desire. Gibson is a young actor, set to conquer many more stages to come. His Antinous bears the instinct for survival, feeding on the frailty of others to impose his supremacy. Gibson is the epitomy of Greek beauty, immortalized in the bold form of Roman marble. His command of character holds power of his audience, not because he is true to a youth who lived almost two thousand years ago, but because he could breathe such life into the ideas and the universal truths of human nature. You are certain to see and hear much more of Ethan Gibson in the years to come. In Scandalous Boy, his star shines bright. Its incandescence will continue to light up his future career.


Gibson and Edie under Atfield’s meticulously detailed and sensitive direction are excellently supported by Craemer’s forlorn and tormented Lucius, Strand’s bitter and veangeful Sabina and Hughes’s simple and yet instinctively opportunistic Marcellus. This cast is a director’s gift and Atfield and his team have made the most of the opportunities they have to bring this forgotten historical tale to life. It is elegantly staged on the Street’s mainstage, dominated by Imogen Keen’s luxurious circular bed, adorned with Keen’s superb taste for textile and unobtrusively and effectively lit by Gillian Schwab. Liberty Kerr’s sound design transports us from any preconception and lends the play a dynamism that permeates the production.


Unless you are shackled by prejudice, smothered with preconceived ideas or offended by Nature’s beauty, Scandalous Boy is a play that will intrigue and astound and provoke thought, discussion and important introspection. It is a new play and there is some room still for dramaturgical investigation, especially within the scenes between Antinous and Lucius and Antinous and Sabina, but any improvements here would simply be part of the ongoing development of a drama that is set to make its mark on many more stages, as long as it can be done as well as this world premiere at The Street has done.


As I write, there are sadly only three performances  left at The Street. It would be a scandal to miss it. 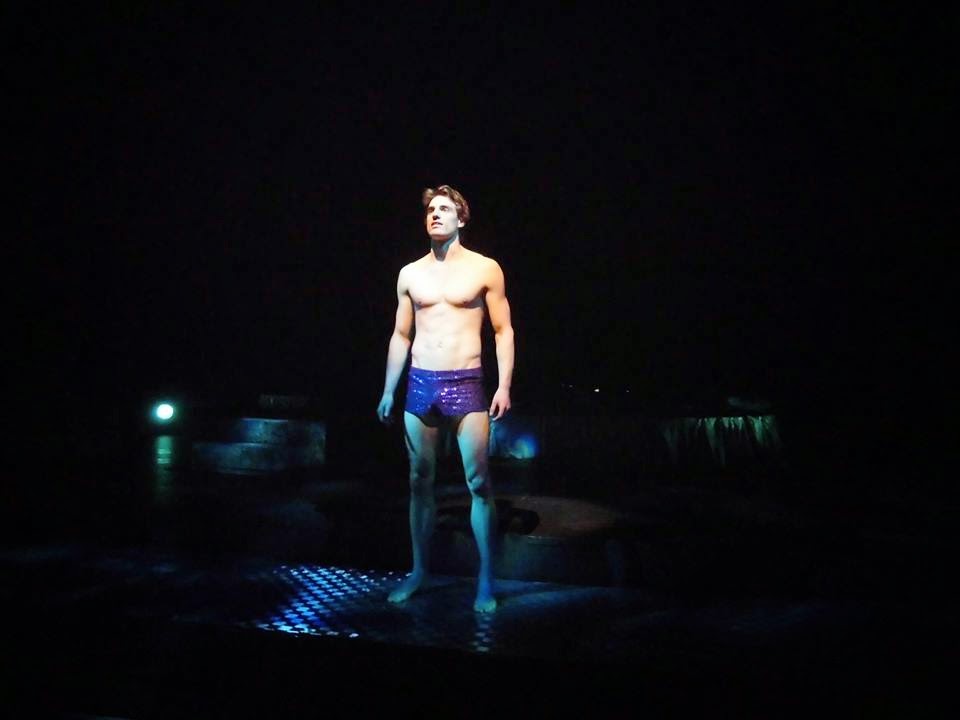 Posted by Canberra Critics Circle at 11:52 AM