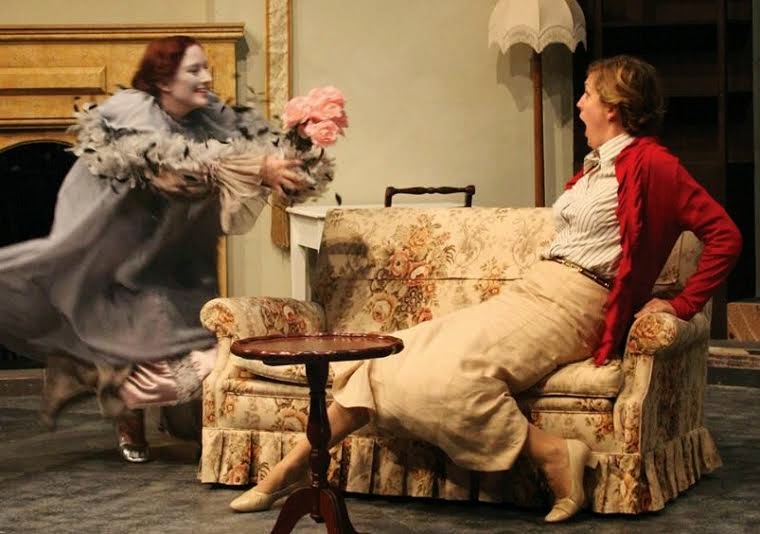 Canberra Repertory delivers a charming and engaging production of repertory staple "Blithe Spirit" (by playwright Noel Coward).  While the script is starting to creak in places Kate Blackhurst's direction (aided by some exceptional casting) provides a crispness and precision that gives the play the smoothness and sparkle of fine champagne - and just as much delight.


Sniffy author Charles Condomine (played with characteristic aristocratic hauteur by Peter Holland) has invited a spirit medium over for dinner: not for her company, but to steal her quirks and patter for a new book.  His wife Ruth (Emma Wood) is apparently a perfect match, equally cynical and sardonic - and, in a very English way, also a trifle ill-bred.  Charles and Ruth are not bad people, but inviting someone over just to make fun of them simply lacks class (the conceit that it's for Charles' book doesn't make a great deal of sense either – when confronted by a famous novelist seeking their help, most people are likely to be generous with their experiences, not clam up).  However they are punished for their sheer bad manners when the medium successfully conjures a ghost - Charles' winsome, spritely, sexy and highly mischievous first wife Elvira (a perfectly cast Anita Davenport).  Charles is delighted to have both women in his life and tries to convince his two wives that the only sensible option now is to embrace bigamy.  Of course his wives object to this solution and battlelines are drawn between the wives living and dead for mastery of Charles.
Casting is this production's great strength.  Peter Holland, Emma Wood and Anita Davenport all strike the perfect note in their performances, and the supporting cast are equally strong.  Elaine Noon as family friend Mrs. Bradman provides a contrast to the Condomines by treating the spirit medium with sincere respect.  Her husband Doctor Bradman (Don Smith) is sceptical, but he is at least honest about his contempt for spiritualism – still one up on the Condomines.  Liz St. Clair-Long frequently steals scenes as the quirky and energetic medium Madam Arcarti, while Yanina Clifton delivers sparkling moments of physical comedy in her appearances as a nervous and over-eager maid.  I've rarely seen a production so expertly cast and director Kate Blackhurst deserves a lot of credit for her savvy choices.
That said, I had trouble making sense of Charles' feelings for his two wives.  Ruth and Charles seem extremely well-matched – almost brother and sister rather than husband and wife.  He repeatedly insists that he never misses his first wife, so of course we assume that he's lying and part of him secretly longs for her.  But, no, he really is just cold.  In the final act Ruth dies and her passing barely registers as a blip.  True, his views on the spirit world may have been altered by recent experiences, but his reaction is a too sociopathic to convince us that he is capable of loving anyone.  Rather than a man who loves two women and has to choose between them (or cannot make that choice), he is revealed as a man who has always been dominated by women and can only be free by getting rid of them (through the handy use of exorcism, of course).  It's definitely a script problem: the play sets up an amazing situation in the first act and then deftly sidesteps it in the second.  I could believe in the ghost - but I couldn't quite believe in Charles.
Another flaw in this production is its excessive length.  This is where the play felt most dated - Coward's script is witty, but it tends to meander around issues rather than showing us action.  The first act was ninety minutes, and at least thirty minutes of that could have been snipped with little cost to the play.  Characters spend far too much time discussing their situations rather than actually doing anything about them.  Even light trimming would speed up the action.
But even with these criticisms, I genuinely loved this production.  I have seen plays this year that were more ostentatiously brilliant, but none that were quite as entertaining.  Even when it was over-long (the first act became a battle of endurance near the end), I was still enjoying myself.  The acting was so fine that I wanted to savour every moment, particularly Anita Davenport's amazing performance as Elvira (a massive triumph for the performer).  As I've said, the play is starting to show its age - this is one haunted house story that's crying out for renovations.  But even if the paint is starting to fade and the furniture has seen better days, it’s still a nice place to spend the night.
This wasn't the best show I've seen this year – but it's the one I enjoyed the most.