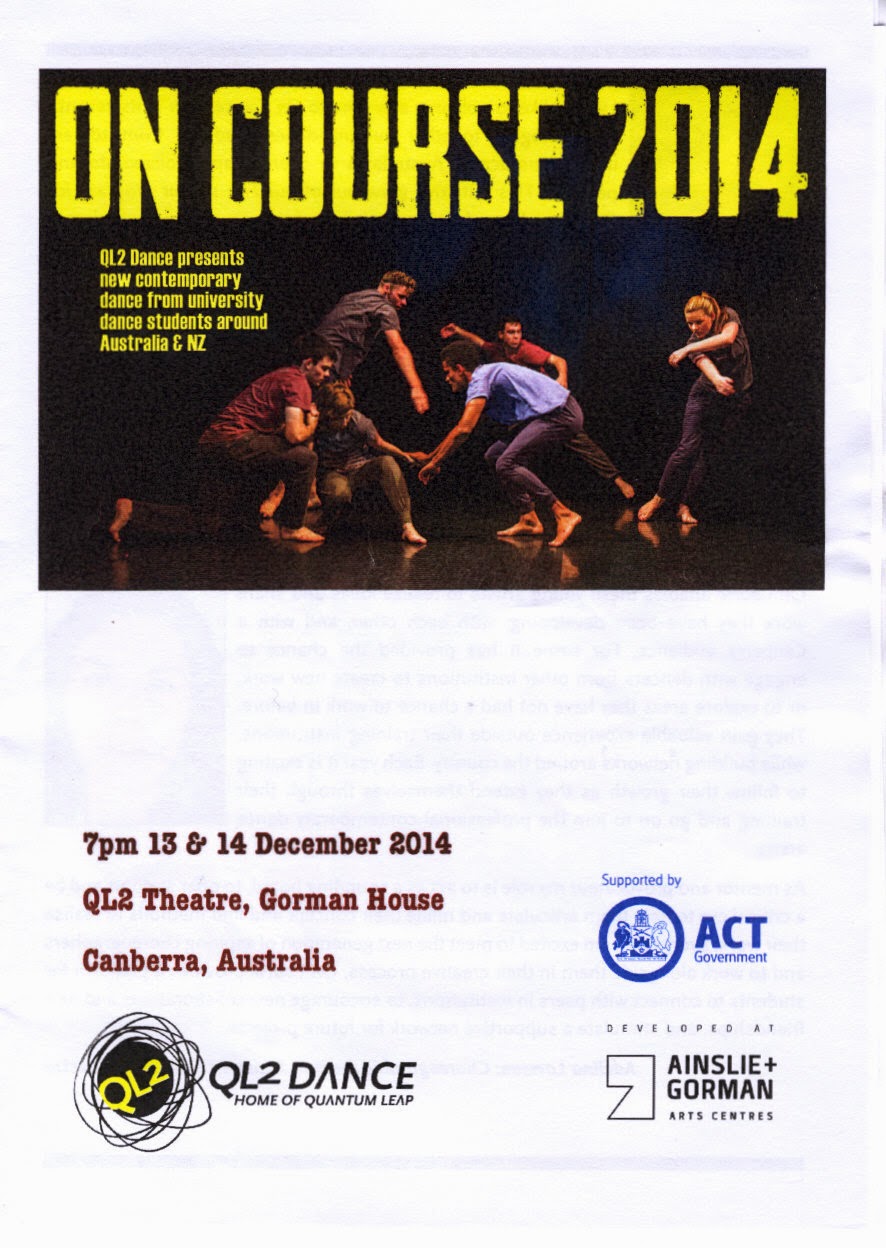 QL2 Dance’s final program for the year brings together current dance students from tertiary institutions across Australia to choreograph, collaborate and perform.  They are joined by current Quantum Leapers who have the opportunity to participate as dancers, working alongside the tertiary students.  This year seven works were presented and were introduced prior to each performance by the respective choreographer.

Sam Hall from the New Zealand School Of Dance (NZSD) presented ‘Earth V.2’, a a discussion on how we might individually cope if earth was destroyed and we had to start a new life on another planet.  This was a finely detailed work with a strong and clear message, nicely danced by a group of six.

‘Disambiguation’ was choreographed by Australian, Melanie Kerr now studying at Falmouth University in the United Kingdom.  A study of stereotyping and how it impacts on our society, the use of masks gave this clever work an almost dream-like quality.

Utilizing film, music and live dance in ‘(Limits at infinity, approaching zero)’, Chad McLachlan, from the Victorian College Of The Arts (VCA) choreographed, and also danced with Ryan Stone, a visually original concept where film seemed to mirror and blend with live dance.

‘Impetus’, by Ayesha Katz, currently studying at the Western Australian Academy of Performing Arts (WAAPA), was a beautiful work about energy and motion.  Equally lyrical and dramatic, there were great solo elements as well as excellent ensemble work with the dancers plus a good choice of music.

Dean-Ryan Lincoln, also from WAAPA, presented and danced a deeply thoughtful solo work about mind and body, knowledge and the aim to achieve called, ‘When The Wolves Turn Blue’.

Tanya Brown, another student from WAAPA, gave us an amusing and witty piece called ‘Buzz Off!’ which started with the idea ‘If only our thoughts were as easy to kill as mosquitoes’.

‘Experiment’ by Amanda Lee from the Victorian College of the Arts (VCA) was a joyous work asking, ‘What if we never lost our magical sense of imagination and creativity we had as children?’  It was imaginative and a delightful end to the program.

All seven works were of a high standard showing great creativity and a clear sense of purpose.  The choreographers were well-served by the dancers who performed with confidence throughout the program.

This was a stimulating and entertaining dance program that was a delight to attend.