Images – a piano recital to coincide with the exhibition ‘Impressions Of Paris: Daumier, Degas and Lautrec’ 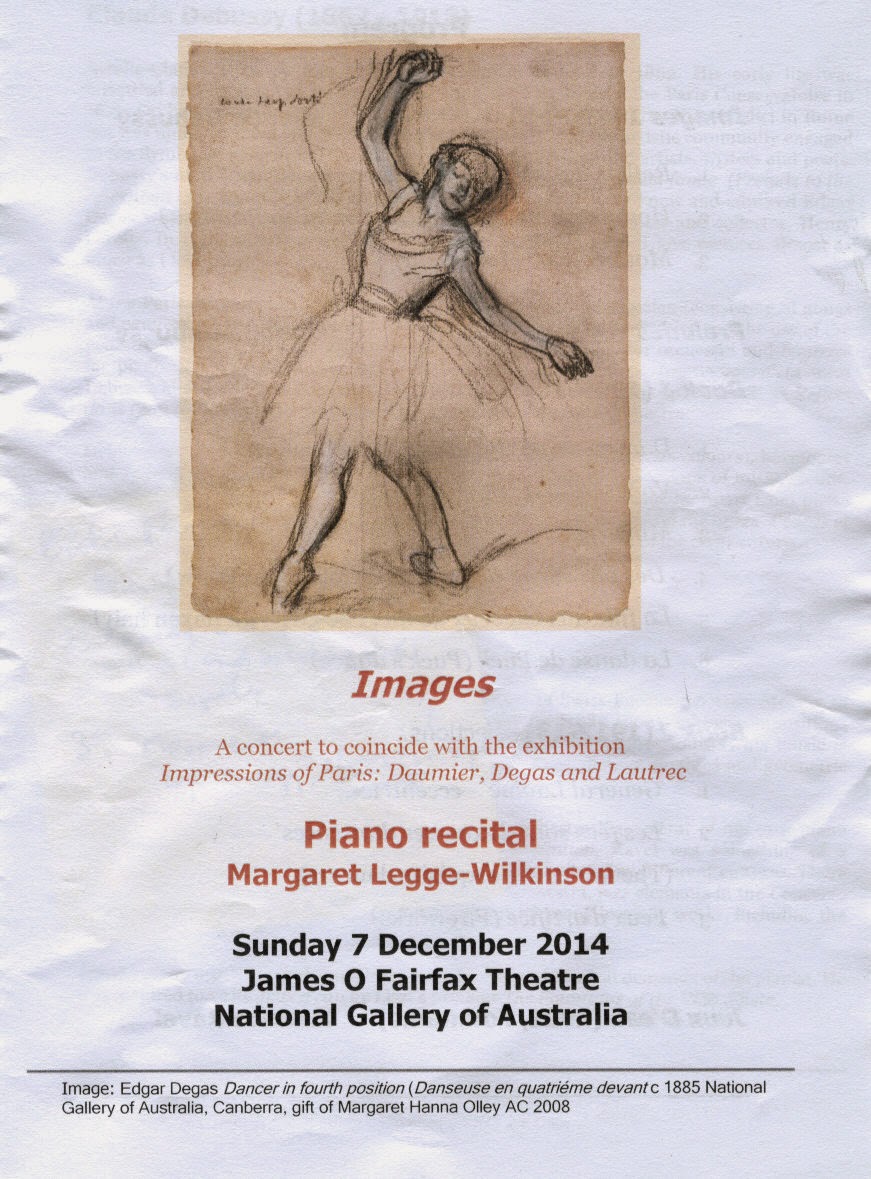 It’s hard to think of something better to do on a Sunday afternoon than listen to a program of music by Claude Debussy and Maurice Ravel played by composer-pianist, Margaret Legge-Wilkinson.

Designed to coincide with the National Gallery of Australia’s current ‘Impressions of Paris’ exhibition, the concert featured music selections of Debussy’s Preludes from Books 1 and 2 and Images 1st Series plus Ravel’s Jeux Deau (Fountains).  As contemporaries of the French Impressionist painters, the composers’ music was an excellent recital choice.  Margaret Legge-Wilkinson has performed as soloist, accompanist and chamber musician in Australia and Europe for over 30 years.

Commencing with the shimmering ‘Reflections in the Water’ from Debussy’s Images 1st Series and on through the selections from the Preludes, the choice of pieces displayed the evocative atmospheres Debussy created so superbly in his music.  Especially memorable were the gently reflective ‘Hommage to Rameau’, the feistiness of ‘Minstrels’, the delightful eccentricity of ‘General Lavine’, the melancholy of ‘Footprints in the Snow’, the quirkiness of ‘Puck’s Dance’ and the spectacular musical colours of ‘Fireworks’.  Ravel’s ‘Jeau D’eau (Fountains)’ was more conventionally classical in style and a refreshing and charming piece to end the concert.

Margaret Legge-Wilkinson‘s playing was clear and nicely paced, bringing out all the atmosphere, colour and wit of the works.  While her spoken description of the works was welcome, her delivery was not as organized as it could have been.

However, it’s the music that’s important here and in that respect Margaret Legge-Wilkinson certainly delivered the goods.