Set in contemporary Lebanon, Capernaum takes its name from a town that stood on the shores of the Sea of Galilee in biblical times.  With a nod to the past and to the future, it's an intriguing title and an apt one. In the ancient languages of the region it meant 'chaos'.

The opening shots are serene enough, high in the sky above the noise and confusion below. But wait, the first images look like encampments where roofs of plastic sheeting are secured by rubber tyres. A reminder that Lebanon hosts the highest number of refugees per capita in the world.

Capernaum is a mix of family melodrama and political activism, filmed on location in the jumble of disadvantage on the streets of Beirut. It is where Zain (played by Zain Al Rafeea) and his siblings spend most of their time, selling refreshments to boost the family income instead of attending school.

The parents are hopeless. Father, Selim (Fadi Youssef) does little but sit around, while the mother, Souad (Kawsar Al Haddad), has an ingenious method for smuggling drugs into prison in the laundry.

Even that doesn’t yield enough money. To Zain’s dismay, his parents sell off his precious sister, 11-year-old Sahar (Haita Izzam), to the weird adult son of their landlord. When they exchange her for a few hens and some help with the rent, it’s the trigger for 12-yer-old Zain to leave home.The boy’s forlorn journey to who knows where ends in a shanty town that is home to people without papers, like himself.

A young Ethiopian woman, Rahil (Yordanos Shiferaw), who he encounters at the funfair takes him in and he cares for her toddler son Yonas (gorgeous Boluwatife ‘Treasure’ Bankole) while she goes to work. The unlikely arrangement works well until the day Rahil doesn’t return home. 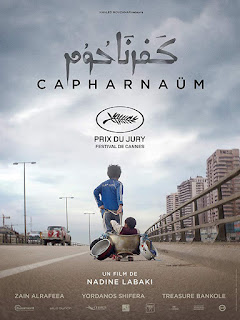 It leaves Zain and Yonas to fend for themselves, a terrifying prospect, with danger on all sides. The time these two spend together is the film’s emotional centre, captured with a weaving, subjective camera from Christopher Aoun that establishes powerful rapport.

Rapport and compassion is what this film from Nadine Labaki is all about. She explored the women's perspective on the civil strife that has racked Lebanon for decades in her first feature, Caramel, set in a hairdressing salon. In this, her third feature, the examines the plight of children of displaced families, and the responsibility of parents towards the children that they give life.

The boy who plays Zain, Zain Al Rafeea, is himself a refugee who fled southern Syria with his family. There is a story about him on the UNHCR website. Neither he, nor any of the other performers in Capernaum were actors. As director Labaki puts it, her entire cast were simply playing ‘their own lives’.

The courtroom scenes that bookend the film, in which Zain sues his parents for gross neglect, are unlikely in reality. But they are a powerful and thought-provoking device to bring to bear on parental, and community, responsibility. Labaki has a small role here as Zain's lawyer.

Capernaum makes a stirring plea for compassion and is such a visceral, potent experience that it has high impact. With amazing performances from its beautiful young leads, this is an exceptional testament to the will to live.

Jane's reviews are also published on her blog, the Film Critics Circle of Australia, and broadcast on ArtSound FM 92.7