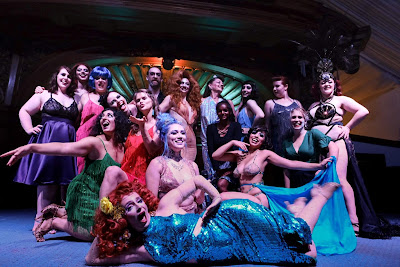 A Canberra-based producer of variety nights, bellydance showcases and burlesque events, #JazidaProductions brings interstate performers to Canberra, facilitates workshops and supports local talent.  ‘Decadence and Debauchery’ featured an evening of interstate and local talent that gave the large audience at The Abbey Function Centre in Nicholls a very entertaining show.  The headline performers have won awards for their work with titles such as ‘Miss Burlesque Australia’, ‘Burlesque Idol Canberra’ and ‘Burlesque Hall Of Fame’.

All of the acts contained elements of classic burlesque – glamorous costumes, teasing performances, comedy and novelty stripping.  It was all performed with good humour and, while it was certainly an adult show, there was nothing offensive about it.

The glamorous MC, Charlie Chapstik, did a fine job warming the audience up at the beginning of the show and kept it nicely simmering throughout.  Her opening burlesque routine was performed with humour and skill. 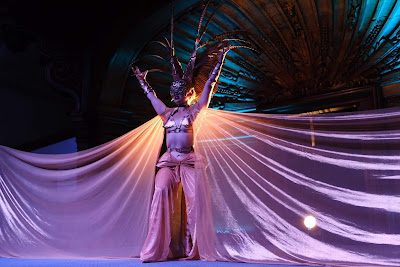 Jazida gave a classy and elegant performance in a beautiful costume, demonstrating her excellent dance skills and Alyssa Kitt made the most of her spectacular costumes and well-executed movement.  Ginger Foxx did a classic stylised performance with ostrich feathers and Maple Rose, with her humorous and precise dancing and stripping, was especially entertaining.

After 11 years, veteran performer, Elizabeth Burton, made a come-back in this show with a class act that demonstrated her finely honed performance skills.  The audience loved her.

The large group called ‘The Fabulous Fan Dancers’ nicely performed two big dance numbers and it was clear how much they were enjoying the experience and positive audience response.

Unfortunately, there were too many late lighting cues and performers working in the dark.  The sound from the MC’s microphone was blurry from where I was sitting down front, making it hard to catch everything she was saying.

Nevertheless, this was an entertaining show which delivered exactly what it promised.

Len Power’s reviews are also broadcast on the Artsound FM 92.7 ‘In the Foyer’ program on Mondays and Wednesdays at 3.30pm.
Posted by Canberra Critics Circle at 6:13 PM