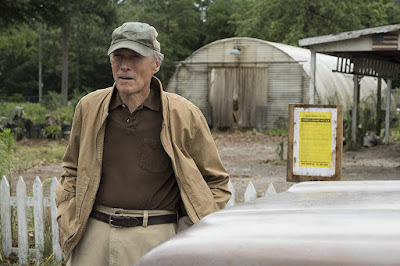 
This is the latest film from an actor whose career began in the 1950s. He has maintained a high profile as a performer and filmmaker each decade since which in itself it gives us pause for thought. That’s a very long time in the public eye, but Clint Eastwood has kept ahead of the curve.

What has he in store for us this time?

As Eastwood approaches his 90th year, he has done his own version of ‘breaking bad’, in which he repeatedly commits execrable crime but justifies it to himself – we surely can’t believe he is duped – with largesse for family members and worthy organisations like veterans of foreign wars.

The Mule is the story of Earl Stone (Eastwood), a grandfather and noted horticulturist, who becomes a courier for a Mexican drug cartel, making deliveries to Chicago. How could anyone suspect that such a venerable person might have cocaine stowed in duffel bags among the pecans in the back of his pickup truck?

No one could suspect him because of his age and clean record, and it gives him a free pass on the highway, working under the nose of the team from the DEA, led by Bradley Cooper’s agent Colin Bates. Even the ex-wife (Dianne Wiest) who we expect knew him well doesn’t catch on when Earl tells her the truth. 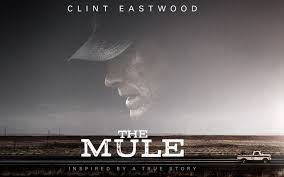 The concept is not a fanciful, either. The Mule is based on a media report that is hard to improve upon.

In 2014, The New York Times ran the story of one Leo Sharp, a veteran and horticulturist famous for his day lilies who became a drug mule, and eventually the cartel’s star recruit. Sharp’s name is changed to Earl Stone in the film, written by Nick Schenk, the screenwriter Eastwood worked with on Gran Torino, another film in which he plays, with some alarming ease, a bigoted old codger.

It’s a role tailor made for Eastwood. Relaxed, behind the wheel of his Ford he looks the part as much as he did on the back of a horse. The laid-back soundtrack suits the languid pacing, though running time is indulgently long. As a crime drama it is largely amiable and easy going, with little tension, and nothing like the high-stakes game that drug running is in real life.

Earning a small fortune with every delivery, Earl uses it to buy back the family home and to pay for his granddaughter’s wedding, but he also gives of his time, the thing that was so much harder for him to yield to those who needed him.

Eastwood so often manages to weave social commentary into his films. It’s what that makes them resonate, time and again. Here he is an elderly, working class male with racist and chauvinist attitudes, who is trying to learn a few life lessons in a fast-changing world that offers shrinking opportunity to him and his kind.

An eye to the big picture seems to me why, over the long years, Eastwood often has something to say beyond the plot and character. This is not his best work, but it encourages thought rather than satiation. When you think about it, the simple cowboy of Rawhide has come a long way.

Jane's reviews can also be read at her blog, the Film Critics Circle of Australia, and heard on ArtSound FM 92.7 (Arts Diaries)