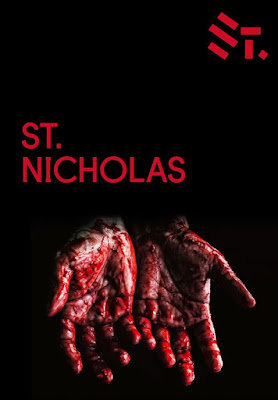 St. Nicholas
Written by Conor McPherson
Directed by Shelley Higgs
The Street Theatre
Streaming online until June 7
Reviewed by Len Power 5 June 2020
The Irish are known to be powerful story tellers. In Conor McPherson’s play, ‘St. Nicholas’, a boozy, angry and bitter theatre critic goes from audience to centre stage and regales us with his own story of obsession for a beautiful actress, his desertion of his family and the bargain he makes with a group of modern-day vampires. Is it true or is it just another story?

Irish playwright, Conor McPherson, has won various awards for his plays and has been produced in London’s West End and on Broadway. ‘St. Nicholas’ is one of his first plays, produced in 1997 in London. He certainly has a way with words.

The critic is played by Craig Alexander. The only actor onstage for the entire show, he skilfully immerses himself completely in this rich character study, resulting in a marathon performance of extraordinary depth.

Set designer, Imogen Keen, has provided a wonderfully spectacular decaying environment for the critic, symbolic of his disordered and self-destructive state of mind.
Director, Shelly Higgs, has created an impressive staging that brings every element of this show together.

Originally scheduled to have a live performance season at this time at The Street Theatre, the play is being presented by online live streaming free to registered audience members in their homes. It’s an interesting experiment that comes with its own set of challenges.

Rather than a flat filming of the production on stage, the company has opted to film it cinematically. It’s a good choice for this one character show which benefits from skilful close up camera work and occasional jump cuts to almost subliminal images, horror movie style.

Craig Alexander has adjusted his performance very well to this different medium, but there was a problem with a lack of clarity in the sound, making a lot of the dialogue difficult to follow. This was especially noticeable for much of the second act.

Overall, this was a technical experiment that worked very well for the most part. I’d still rather have seen it live in a theatre with an audience, of course.
Photo by Creswick Collective

Posted by Canberra Critics Circle at 11:10 AM