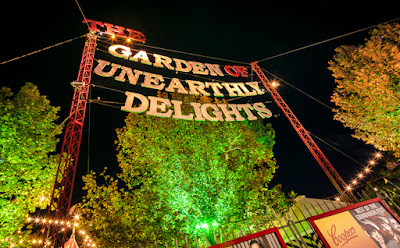 When I think of the Adelaide Fringe I think of crowds – crowds pouring through the gates of the Garden of Unearthly Delights, streaming in to see shows in Gluttony or jostling through the flood of people passing past cafes and restaurants at the lower end of Rundle Street. Further up from this hub of activity in Rundle Mall at the heart of the CBD buskers ply their breathtaking talents for the onlookers drawn to them like moths to the flame. On Museum Mile, Adelaide’s stately end of North Terrace the Royal Croquet Club is there to refresh and entertain the thirsty Fringe-dweller. On some days I will catch the tram to the Entertainment Centre and take the short walk to the Holden Street Theatres to see original and exciting theatre from Australia and overseas, or at other times walk through the city streets to Bakehouse Theatre now an intimate venue with two theatre spaces presenting very different types of work.

This is the Adelaide Fringe, straddling the fading days of Summer and heralding the early month of Autumn. Second only to the world famous Edinburgh Fringe, Adelaide’s Fringe even boasts a reputation as auspicious that since its modern foundation by the late Frank Ford in the Seventies has grown to be a honeypot, attracting producers, artists and audiences from around the world.

The crowds throng into the 275 venues to enjoy the 800 odd events listed in the guide. A quick look at the 104 pages would lead some to believe that the Covid pandemic had had no effect on a community based festival that has survived for over sixty years and has been a magnet for artists from all over Australia and the world during February and March. Since her appointment as CEO and Artistic Director of the Adelaide Fringe, indefatigable Heather Croall has devoted her talents to making the guide easily accessible and the Fringe an artist centred event. Covid has been an asset in some respects. “The Fringe has always comprised 80% South Australian artists” Croall tells me. Before Covid approximately 1100 shows would  have registered to participate in the Adelaide Fringe.  “In 2021 we have been able to highlight the amazing work created here in South Australia and given the Fringe a strong local focus.” Croall tells me.  About 150 artists who might usually arrive from overseas have not come, but the event still manages to pack the programme with performances from 13 diverse genres including Theatre, Comedy, Cabaret, Digital Film, Workshops and Visual Arts and Design.

Covid has also encouraged artists of the open access festival to explore new possibilities. Previous Fringe visitors will notice a slightly different landscape, shaped by innovation. There will be more open air performances and Promenade Theatre as well as stunning light installations. Croall is especially proud of the increase in theatre offerings. Venues such as the Holden Street Theatres, managed by Martha Lott and the Bakehouse as well as Joanne Hartstone’s Black Box in the Botanic Gardens continue to provide high quality theatre shows. “There are many exciting innovations,” Croall says,” because the restrictions have made people think differently. There’s just a lot of great ingenuity and creativity going on across the whole landscape.”

If necessity is the mother of invention, then Croall and her team have had to be creative in ensuring that the Fringe can overcome the challenges of presenting a vibrant and successful festival in the time of Covid. “We’ve really focused on making sure that the artists benefit more and more from the Fringe” Croall says. “We’ve spent a lot of the last ten months fundraising, knowing that whatever money we raised we were going to give out in grants to artists and venues. Three million dollars was raised and every cent went to successful grant applicants who could be encouraged to present work that would otherwise not have been able to afford the losses that they might have faced. With a view to highlighting South Australian talent each listing of a genre in the guide is preceded by a Made in SA heading that indicates those artists who have been assisted by the grant.

“Our theatre programme is just so strong this year.” Croall says. Pages 81 to 87 of the guide demonstrate just how many original shows have been created, including works from South Australia, interstate and a couple from overseas. Continuing the theme of a different landscape, Croall explains that artists naturally respond to their immediate experiences and a number of the shows are about isolation. “I’m really excited about the theatre programme, because we are open access and when we opened the registrations we didn’t know what would come and especially when we said that you could apply for a small grant. When people started sending in their applications we said ‘Wow’ there’s a lot of applications coming in here.”

A look through the easily navigated Fringe guide reveals a balanced programme of familiar favourites with exciting innovation. Fringe-goers will still be able to visit their favourite venues like Holden Street, The Bakehouse, Tandanya, Star Theatres and Black Box in the Botanic Gardens as well as experience the new works at the Rhino Room, Mill and the Rumpus Room. They will be able to visit favourite comedians like Tim Ferguson, Ross Noble and the Umbilical Brothers and search out unfamiliar entertainers.

For those who may not be able to be present in person, this year’s Fringe will offer Watch From Home, which allows people to buy a ticket for a live streamed event that they can enjoy in the comfort of their own home. Coall’s documentary film Yer Old Faither about her father, Glaswegian immigrant and Whyalla obstetrician, John Croall, which received the audience award at the Australian Film Festival last year will be screened at the Capri Cinema on February 21st and 27th. and will later be available on DocPlay. “It makes people think of their own father.” Croall says.

Another moving and uplifting event at the Black Box Theatre in the Botanic Gardens is Still Alive (and kicking), a play with songs and music by Gill Hicks, South Australia’s courageous and inspiring survivor of the London Bombing. In stark contrast, Queen’s Theatre, reputedly South Australia’s oldest theatre, will be the venue for amazing cabaret shows. The diversity is phenomenal, and audiences will be able to revel in their selections. With so many shows on the offing, producers and venue operators and artists face a considerable risk, especially at a time of social distancing and seating restrictions. Because of this, the Fringe has introduced Double Your Applause, whereby those who have not been financially disadvantaged by the pandemic could buy two tickets, one for themselves and one for the empty seat next to them, so that the box office would double the income. It is another example of how Croall has done everything possible to ensure that the artists benefit from the risks that they take to keep the Fringe alive in this difficult time.

“The Fringe is a collaboration. When it works the best is when the venue and the artists are well-matched. To this end, Croall has closed the Fringe Club and encouraged audiences to visit and support the many late night bars springing up about the city. It’s another way of ensuring that the money flows to young entrepreneurs, producers and artists who are bringing the late night entertainment to life. “ As someone said to me from the British Council the other day,” Croall concludes, ‘All eyes are on Adelaide’. From all over the world right now, because it is really astounding that we are about to run out this enormous festival and unbelievable that we are probably the only Fringe festival in the world that hasn’t missed an edition.”

It’s a claim that would make the late Frank Ford, founder of the modern Fringe and benefactor justly proud.